It’s been a few months since Albertans went to the polls and voted out Rachel Notley and the NDP put Jason Kenney and the United Conservatives into power. Although Notley showed support for the oil and gas industry, it was debatable just how much of a priority it was for her and it was thought that the change in government could help push issues in the industry forward, especially with the federal government.

Getting pipelines approved has been a significant struggle for the industry thus far, which is a key reason why a stock like Enbridge Inc (TSX:ENB)(NYSE:ENB) hasn’t seen much bullishness even though oil prices have been up. There simply hasn’t been much investment in the Canadian oil and gas industry and a big part of that has been the political climate and the obstacles facing oil and gas companies.

Has the election had a positive result on oil and gas stocks?

It might be a little surprising that since the election, there hasn’t really been any improvement for oil and gas stocks. Share prices have actually fallen, with Enbridge declining around 5% since the change in power took place. 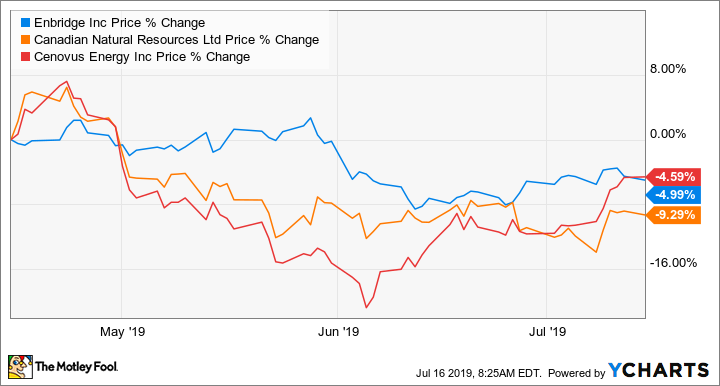 If we see a change at the federal level, that could have a much more significant impact on the industry. It is, after all, the federal regulators that have implemented rules governing the approval process for pipelines, and it may not be until we see more oil and gas-friendly government in place that we see investors slowly returning to the industry.

However, at this point, there’s still likely a lack of trust that things will be any different even with the conservatives regaining power in Alberta. The downturn in Alberta has been longer than in prior cycles and it’s not as simple as waiting it out anymore.

A great example of the problems is the level of capital expenditures we’ve seen in recent years:

The results speak for themselves, as we are still nowhere near the level of investment that we saw five years ago. Although there’s been a bit of a bump in recent years, companies have been scaling back in an effort to sharpen up their financials and drive as much value for shareholders as possible. Investing in the industry and potentially wasting money on projects that might not get off the ground is simply not a good use of investment dollars.

Enbridge stock has struggled over the past few years, and it will likely continue doing so for the foreseeable future. The sad reality is that there’s little the company can to do win back investors today. The real problems are at the macro level in the industry. Until those issues are fixed, Enbridge stock will continue to be a tough buy for investors.

Fool contributor David Jagielski has no position in any of the stocks mentioned. The Motley Fool owns shares of Enbridge. Enbridge is a recommendation of Stock Advisor Canada.