“The metric that the press usually focuses on is growth in revenues and profits. It’s the increase in a company’s per share value, not growth in sales or earnings or employees, that offers the ultimate barometer of a CEO’s greatness.”

— The Outsiders: Eight Unconventional CEOs and Their Radically Rational Blueprint for Success

When we invest in a company, we are entrusting our capital to management. It’s logical to assume our return on investment will only be as good as the people running it. As evidenced by the single graphic below, it’s clear that the executive team at Imperial Oil (TSX: IMO) is the best in the Alberta oil patch.

Why should I buy this stock?

At first glance, there’s no compelling reason you should.

According to the company’s own guidance, production is expected to grow 10% annually through 2020. But the company’s oil sand rivals such as Canadian Natural Resources and Suncor are growing output even faster.

How about dividends? Once again Imperial disappoints. At 1.01% the stock has the lowest yield amongst its peers. Income hungry investors can easily triple their income stream in names like Cenovus or Husky Energy.

This might be acceptable if Imperial was “cheap.” But on most conventional valuation metrics — such as EV/EBITDAX, price to earnings, or price to book — the stock actually looks a little expensive.

The case to buy Imperial Oil in a single chart

Of course, basing any investment decision on a single statistic would be foolhardy. However, the case to buy Imperial Oil could probably be summed up by this graphic.

What does the chart show? Imperial Oil is (by a mile) the best capital allocator in the Alberta oil patch.

In the energy industry, we have a useful metric to determine how well a management is allocating our money: return on capital employed, or ROCE. This metric is important in capital intensive industries such as airlines or semiconductors.

What Imperial has that its competitors lack is discipline. The company only allocates capital to its highest returning ventures. If management cannot find enough new projects that meet a high return threshold, they will return excess capital to shareholders through dividends and buybacks. Over the past 20 years, the company has repurchased over half of its outstanding shares. That means shareholders have been able to double their stake in a wonderful business tax-free. 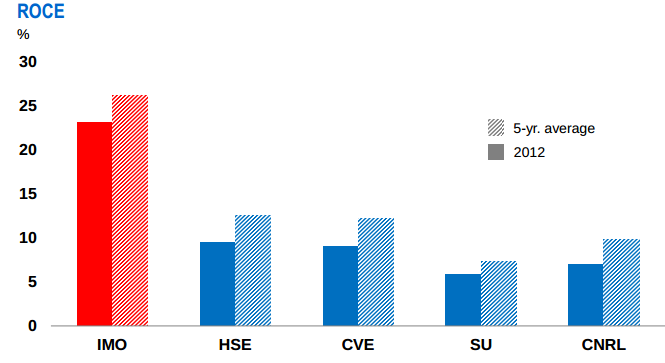 Imperial’s rivals, as apparent by the chart above, are a little too eager to deploy that capital into low quality projects. Managing over a larger corporate empire may stoke some management egos, but happy executives never put money in my pocket. Sure, Imperial could have grown faster as its competitors did. But that would require expensive investments and shareholders may be able to find better returns elsewhere.

Great executives focus on generating returns for shareholders and not growing the size of the business. Sometimes those are synonymous. Sometimes they’re not. Imperial’s management team understands this better than anybody, and that’s why the stock deserves a long-term place in your portfolio.