This article originally appeared on Fool.com

Investing in bitcoin isn’t easy. It’s an online currency for the tech-savvy, difficult to buy and perhaps even harder to store safely. Thus, many investors and speculators have turned to an easier way to own bitcoin, the Bitcoin Investment Trust (NASDAQOTH:GBTC).

The Bitcoin Investment Trust was designed to make holding bitcoin as easy as buying a stock or exchange-traded fund. Traded over the counter, the trust holds about 0.093 bitcoin for each share outstanding. Owning a share is thus the equivalent to owning about one-tenth of a bitcoin.

But like anything, shares of the Bitcoin Investment Trust are governed by the laws of supply and demand, and eager speculators are willing to pay more for each share than the trust’s bitcoins are worth. The fund recently traded for $531 per share, or 105% more than the underlying bitcoin is worth, according to my calculations.

The sponsor of the trust, Grayscale Investments, recently filed to list the trust on the NYSE Arca exchange, where you’ll find most legitimate ETFs. At the same time, it suspended the creation of new trust units, which means that there won’t be any new shares created, at least not any time soon.

Even when it was actively issuing new units, creation wasn’t keeping up with demand. Securities and Exchange Commission filings show it created only 31,400 shares in 2017 in the days leading up to its S-1 filing. With no new supply and an increasing amount of demand, the premium has widened quickly. Shares have traded at an average premium of 39% to underlying value of the bitcoin, according to my calculations. 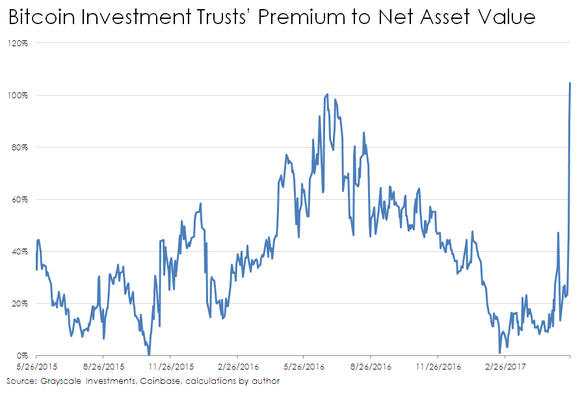 Speculators who pay a premium to buy shares of the trust are taking a big risk by assuming that the supply and demand imbalance is permanent. But things could change, and quickly: Bitcoin could fall out of favor, or speculators could find easier ways to buy and sell bitcoin quickly and in quantity. After all, as recently as April 13, shares traded at a mere 8% premium to NAV.

I find the premium difficult to justify. If anything, I’d argue shares should trade at a discount, given the trust’s 2% annual management fee that slowly eats away at the bitcoin backing each share per year.

Closed-end fund investors often capitalize high management fees at 10 times when valuing a fund. A fee of 2% per year capitalized at 10 times means shares should theoretically trade at a 20% discount to the market value of the underlying bitcoin. The share price would have to fall by as much as 60% to get to a 20% discount to their net asset value, assuming no change in the price of bitcoin.

I have no particular insight into where bitcoin will go from here, but I do know one thing: Fund premiums to net asset value have a tendency to revert to the mean. Investors who hold Bitcoin Investment Trust shares could thus stand to lose money even if bitcoin prices keep moving higher. Buyer beware.