It’s been a rough year for High Liner Foods (TSX:HLF). It is one of the three worst Canadian dividend performers in 2018, as its stock price has cratered by approximately 41%. This type of performance is uncharacteristic of Canadian Dividend Aristocrats. These are companies that have a history of growing dividends for at least five consecutive years.

Despite High Liner’s 10-year dividend-growth streak, it is the worst-performing Aristocrat of the year. In light of its struggles, the company is now yielding over 6%. Take a quick look at the chart below. 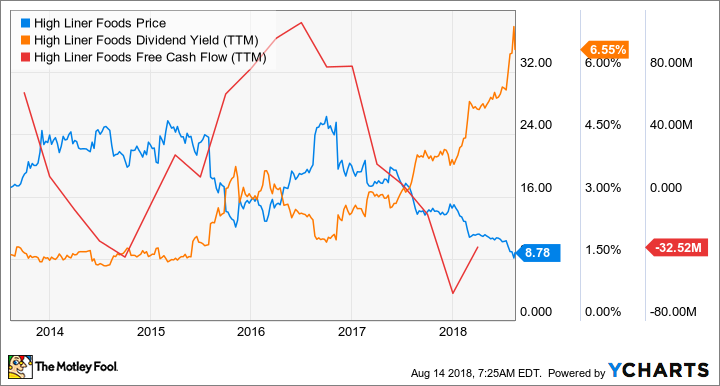 As you can see, High Liner’s yield has been on a steady rise since late 2016. At first glance, it might seem enticing, but be warned: it could be a value trap. The company’s yield has risen to record levels, because its share price has cratered. No investor wants to see this. Companies with higher yields are at greater risk of a dividend cut.

Another bad sign? The company’s free cash flow (FCF) has turned negative. Although companies can usually support short periods of negative FCF, any prolonged period can also put its dividend at risk.

Investors hanging on to High Liner have been waiting for some good news. This morning, the company reported second-quarter results. Unfortunately, the results weren’t great, and its stock price has dipped 8% at the open.

Revenues were also a little light, coming in at $245.3 million in comparison to estimates for $251.8 million. The good news is that revenues increased 5.6% over the second quarter of last year.

The company also announced that it will undergo a restructuring to gain approximately $10 million in annualized cost efficiencies. The company has been weighed down by significant debt, which remained flat at 5.6 times earnings before interest, taxes, depreciation and amortization. Combined with negative FCF of $9 million in the quarter, cost savings are welcomed news for High Liner’s bottom line.

The new president and CEO Rod Hepponstall admitted that challenging times are ahead. In particular, U.S. operations are suffering from soft sales volumes, lower commodity margins, and higher costs — costs which have yet to be “fully passed along to customers.” Herein lies one of the biggest headwinds facing the company.

When Clearwater Seafoods posted strong second-quarter results, there was reason for optimism. Clearwater is one of High Liner’s closest competitors, and the hope was that the company would follow suit. High Liner’s stock had rallied approximately 6% on anticipation of an earnings beat.

High Liner’s new president and CEO has added some much-needed stability and leadership. However, it will take at least a year for the company to realize the full synergies of its restructuring program. Likewise, added costs to implement changes will hurt the company’s bottom line in the next couple of quarters. Unless the trade war comes to an abrupt end, I would expect the company to be under pressure for the remainder of the year.