Concerns surrounding the safety of investing in the cannabis industry have recently come to the attention of investors. While pot stocks had a good month of January to start the year, they’ve struggled since then. With reports surrounding the possibility of write-downs coming for many companies and the recent CannTrust scandal, there are plenty of reasons why investors are spooked today. The pressure to deliver results has made it difficult for companies to be able to focus on growth while staying in line with regulations.

However, not everyone is happy with just growth anymore, as we saw the consequences of that earlier this month when Canopy Growth got rid of its Co-CEO Bruce Linton. The problem is that many of these new cannabis companies are just that – new.

Many have become too focused on trying to generate excitement and results rather than ensuring that processes are being followed and that they’re optimal. Costs have become secondary, which has led to some significant losses for cannabis companies along the way.

That’s why Neptune Wellness Solutions Inc. (TSX:NEPT)(NASDAQ:NEPT) might be one of the better plays that cannabis investors can make today. The company has been around for two decades and has a great deal of experience in producing wellness products.

With that experience comes an important attention to detail that’s necessary for long-term success in the cannabis industry in order to ensure that a company does not run afoul with a regulator like Health Canada.

It may come as no coincidence that as many cannabis companies saw their stocks fall last week, Neptune was going in the opposite direction. As a more established company, Neptune has more of a track record that investors can rely on. And while it too has struggled with profitability over the years, investors might feel that with Neptune, there’s less risk, as the company has demonstrated its ability to grow responsibly. 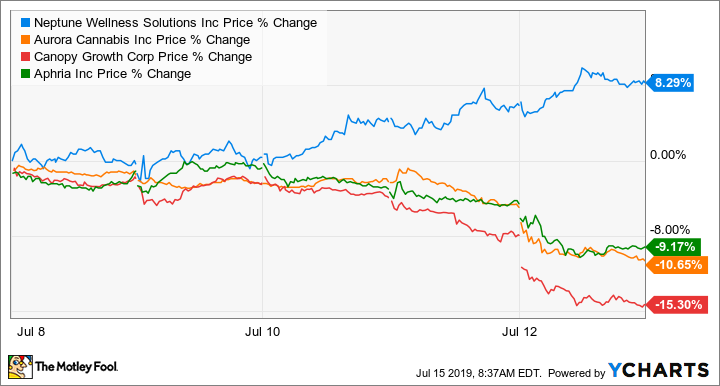 Trust is a big issue in the industry

After CannTrust investors got burned badly from the stock’s shocking losses last week, the issue of trust has become very important in the industry. One of the dangers of investing in cannabis over the past few years is that any news, good or bad, could have a significant impact on a stock, much more than even its financial performance.

Neptune has done a good job of staying out of the press for the wrong reasons and while that doesn’t offer any assurances for the future, it does give investors a more trust in the company than they would in others.

As the stock is a bit more under the radar and not as big of a name as others in the industry, it’s in a good position to succeed if it can continue to build on recent results and improve its prospects for profitability. Neptune is by no means a slam dunk for investors, as there are still questions about its ability to turn a profit and the stock certainly isn’t cheap, trading at more than seven times its book value.

However, relative to other cannabis stocks, it might be one of the safest growth plays for investors to make today in the industry.

Marijuana was legalized across Canada on October 17th, and a little-known Canadian company just unlocked what some experts think could be the key to profiting off the coming marijuana boom.

Besides making key partnerships with Facebook and Amazon, they’ve just made a game-changing deal with the Ontario government.

One grassroots Canadian company has already begun introducing this technology to the market – which is why legendary Canadian investor Iain Butler thinks they have a leg up on Amazon in this once-in-a-generation tech race.

This is the company we think you should strongly consider having in your portfolio if you want to position yourself wisely for the coming marijuana boom.