It feels good to go green by aiming to reduce garbage and to reuse and recycle whenever possible. I encourage everyone to keep doing that. However, if you were thinking of going green with renewable power stocks, I’d urge you to avoid them for now at least, as they have run up so much in so little time. 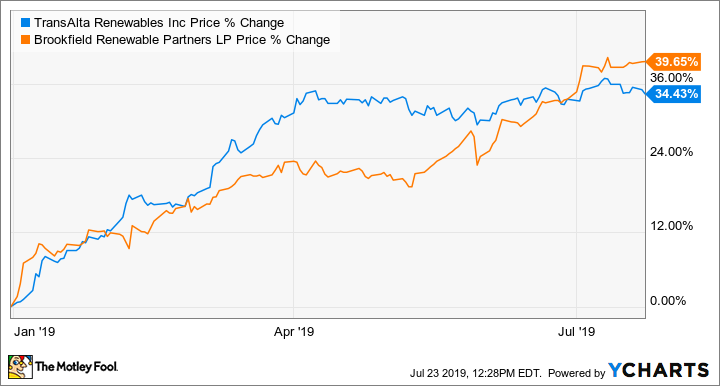 I believe that the renewable power stocks won’t do well over the next year or two because they are fully valued at their current quotations.

There’s no margin of safety for the stocks

Brookfield Renewable expects to increase its funds from operations (FFO) per unit by 6-11% per year in the long run, allowing the stock to deliver cash distribution growth of 5-9% per year as the company has outlined.

Between 2011 and 2018, BEP’s FFO per unit increased by less than 4% per year, but its three-year FFO growth was 8.5%, which matched the midpoint of its target FFO growth rate. History indicates that the company’s cash flow generation can be quite volatile and unpredictable, which suggests that investors can buy at better valuations when the business disappoints (temporarily).

Assuming BEP’s FFO per unit increases by 8.5% this year, the stock trades at a forward multiple of about 15.4. So, there’s essentially no margin of safety for the stock and no reason to expect healthy price appreciation over the next year.

Indeed, analysts have a price target of US$35.63 on the stock, which represents a downside of about 1.5% from current levels.

TransAlta Renewables stock is in a similar, albeit worse situation because of its slower growth. The stock has run up too far, too fast. Since it was spun off from TransAlta in 2013, RNW stock has increased its cash flow per share by a meagre 1% per year. That barely keeps pace with the long-term inflation rate of 3%!

RNW stock trades at a multiple of about 10.4, while it’s growing by about 1%. So, it’s a very pricey stock! Indeed, analysts have a price target of $13.65 on the stock, which represents a downside of about 2% from current levels.

How safe are their dividends?

While I believe it’ll be poor decision-making to buy BEP or RNW stock today, some investors may have bought them at much lower prices and are holding them for the income.

BEP and RNW’s payout ratios are estimated to be roughly 90% and 70%, respectively, this year. So, RNW’s yield of 6.8% looks safer than BEP’s yield of 5.4%. However, because BEP is expected to experience higher growth than RNW, it can improve its payout ratio over time and will make a better long-term investment.

Renewable power stocks are expensive today. Therefore, I urge investors to avoid going green in them unless the stocks fall significantly over the next 24 months. Between the two, Brookfield Renewable stock is a better long-term investment with global opportunities and higher growth.