In general, the big Canadian banks are great long-term dividend investments. You can further boost your returns by investing strategically.

These banks have recently appreciated as follows from their August and September lows:

The recent three top-performing bank stocks, Scotiabank, CIBC, and Canadian Western Bank, are likely to continue to outperform the rest of the group.

Why did Scotiabank and CIBC beat the other Big Banks?

The Big Six banks tend to move in tandem with each other, as they’re driven by similar headwinds or tailwinds.

For example, an increase in the overnight interest rate is a positive for the banks because it will help widen the net interest margin, and as a result, the banks will earn more profit.

However, the vice versa is also true — if the overnight rate declines, it’ll be a headwind for the banks, and they may trade lower.

In their latest rallies, we saw the stocks of Scotiabank and CIBC leaving their peers in the dust. Why did these two banks, in particular, outperform the others this time? The answer is simple. Both were previously trading at bigger discounts than that of their peers.

When their price-to-earnings ratios begin reverting to the norm, as is what has happened, they experience a bigger boost in upward action.

You’ll be exhilarated to know that the reversion is not yet complete, meaning that the stocks of both Scotiabank and CIBC have room to run based on their discounted shares. Moreover, their earnings will still be growing to drive further price appreciation and dividend growth in the long run.

As of writing, Scotiabank and CIBC offer juicy yields of 4.8% and 5.3%, respectively. These are still relatively high yields for the banks, suggesting that the banks are indeed undervalued. 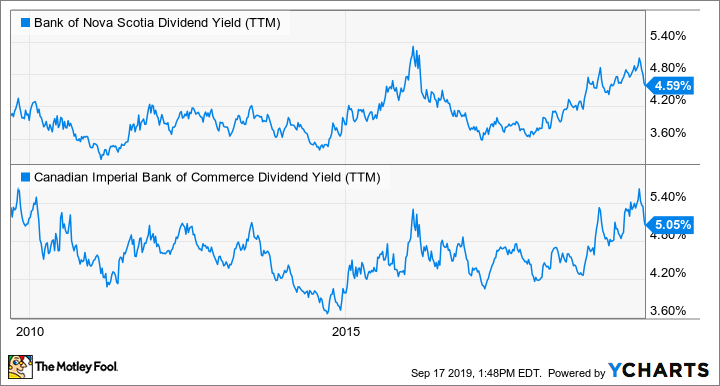 Why did Canadian Western Bank beat the rest?

Canadian Western Bank moves differently from the Big Six banks; its dividend growth streak is much stronger. Thus, the quality bank stock can serve diversification purposes in the financial services portion of your portfolio.

As Canadian Western Bank still has meaningful exposure to Alberta, the booms and busts of the resource-rich province’s economy will still impact the bank’s bottom line.

If you’re investing in Canadian Western Bank, be prepared for a more volatile ride than you would in any of the Big Six banks. It’s reassuring, however, that through thick and thin, the bank has hiked its dividend for 27 years consecutively.