The stock market is always volatile. It’s normal to see it moving up or down 1-3% in one trading day. However, the market can get above-average volatile when there’s increased uncertainty, such as the trade talks between the United States and China with good or bad news popping up here and there, or when the oil prices go up or down significantly in a short time.

Often, ultra high growth stocks are characterized by underlying businesses with incredible revenue growth but aren’t necessarily profitable yet. These stocks are more speculative than the average stock.

For example, TMX Money recently pointed out that Canopy Growth (TSX:WEED)(NYSE:CGC) was the top growth stock on the Toronto Stock Exchange over the last three years. It showed that the top performer rose more than 1,800% in the period!

However, after crashing more than 50% from its high, WEED stock has only appreciated by more than 500% from three years ago. 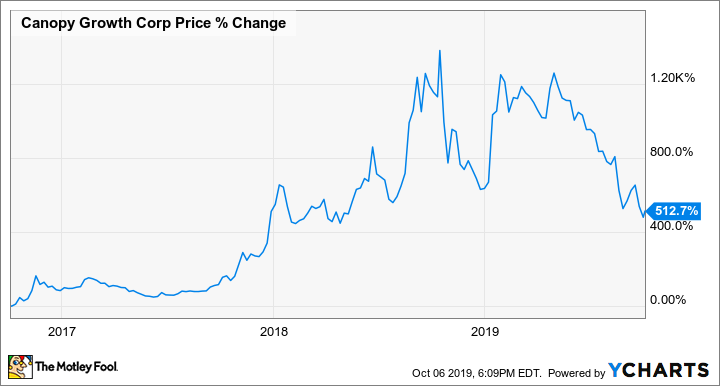 Canopy Growth’s three-year revenue growth rate is 1,680%, while its revenue is nearly three times that of a year ago. As the company grows larger, it’s going to be harder and harder for it to increase its revenue at a high rate.

That said, the worst may be over for Canopy Growth. Last quarter, the company explained that it experienced a lower margin largely from operating costs related to facilities that haven’t begun production yet. So, WEED’s gross margin should rebound meaningfully in subsequent quarters.

We’re at or near a late economic cycle. Investors may therefore opt to limit their exposures to ultra high growth stocks, cyclical stocks, and small-cap stocks with the aim of greatly reducing the volatility of their portfolios.

If you have little to no exposure to these three types of stocks in the next market downturn, you should experience a much smaller draw-down in your stock portfolio.

Air Canada (TSX:AC) stock has had a fascinating run over the last year and a half. It spent the first…

The S&P/TSX 60 Index is an excellent hunting ground for top stocks. This index tracks 60 leading companies in leading…

The world is experiencing an energy crunch, a stark contrast to the glut a year before when demand slumped so…

Retirees: 3 Dirt-Cheap Dividend Stocks That Yield up to 4.5%

The retirement picture for many Canadians was already uncertain coming into this new decade. Unfortunately, the COVID-19 pandemic stirred more…