It could be a big week for HEXO (TSX:HEXO)(NYSE:HEXO), as the pot producer releases its third-quarter earnings on Thursday before the markets open. Shares of the company have been soaring over the past month, as they’re up more than 70%. On Monday, the stock was up more than 20% by midday. Here’s how it’s done of late compared to its peers: 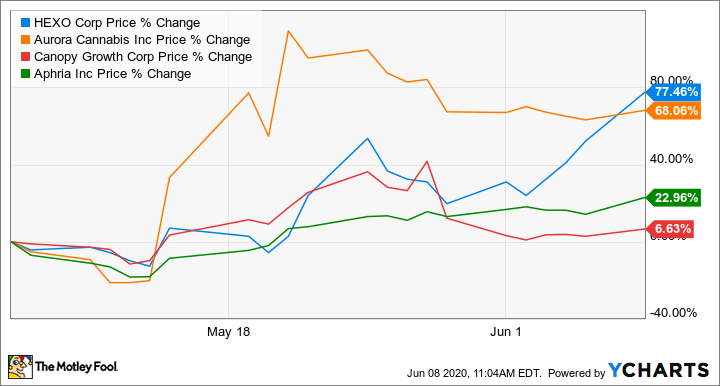 The stock’s been performing very well recently, but over the past year the results tell a bit of a different story: 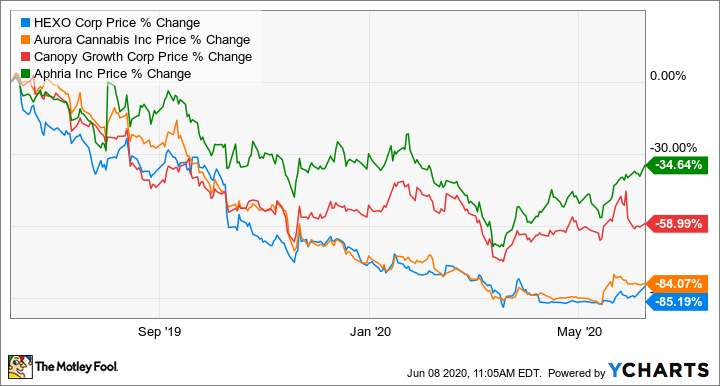 What can we attribute these gains to?

The markets as a whole have been fairly bullish over the past few weeks. There’s been growing optimism, as cities in North America have been reopening. There’s hope that the COVID-19 pandemic may not have as disastrous an impact on the economy as once feared. And for stocks like HEXO that have incurred significant losses over the past year, it’s made them more attractive buys in the process. After all, if the economy’s doing better, then there will be more consumers making discretionary purchases, and that means more pot buying.

But where the stock goes from here will largely depend on how it does in its upcoming earnings release.

What investors should look for when the company releases earnings

HEXO has incurred a loss in each of its last 10 quarterly results. It would be nothing short of shocking if the company were to post a profit, especially since in its last quarter it had a mammoth $298 million loss. That was due to some sizeable writedowns that weighed the company’s bottom line down. However, HEXO had a negative gross margin, so profitability wasn’t going to happen with or without the writedowns.

It’s a given that HEXO will occur a loss in its third quarter; the only question is how big it will be.

The one thing investors should keep an eye out for is impairments and whether they reoccur, and if so, to what degree? Another series of large writedowns could send the stock crashing despite its recent gains. Another area investors will want to look for is whether HEXO’s growing its sales — something that hasn’t been an automatic in the cannabis industry this year. HEXO’s value brand should help take revenue away from the black market, but it may not be enough to offset the downturn that COVID-19 may have caused in recent months.

Is HEXO a buy?

Investors are taking on a big risk when buying a stock that’s rallying significantly heading into earnings. It’s a sign that there’s a lot of excitement heading into earnings, and that also means expectations will be high for the company to do well. Canopy Growth didn’t post impressive sales numbers when it released its most recent earnings, and that was even as the industry saw lots of panic buying in March. HEXO’s earnings will go until the end of April when panic buying slowed.

Despite HEXO’s decline over the past year, there are more reasons to expect a poor showing in Q3 than there are that the company will beat expectations. And that’s why I wouldn’t get on the bandwagon, especially as the stock’s near its three-month high. Investors could incur significant losses if the company doesn’t post an amazing performance this week.

Aurora Cannabis (TSX:ACB)(NASDAQ:ACB) is still losing money. Its revenue is declining, too.

Why Canopy Growth Stock Climbed as Much as 20% on Monday

A glimmer of hope from the U.S. Congress may lead to renewed interest in marijuana investing.

TSX Today: What to Watch for in Stocks on Friday, July 15

A continued selloff in metals prices is likely to pressure the commodity-heavy TSX Composite benchmark at the open today.

With the Cannabis Industry Trading Ultra-Cheap, Organigram Stock Looks Like a Screaming Buy!

After selling off for years, Organigram stock now offers tonnes of value and is easily one of the best cannabis…

The cannabis stock industry remains an incredibly high risk one, but Canopy Growth (TSX:WEED)(NYSE:CGC) stock provides the best opportunity for…

Should You Stay Away From HEXO Stock?

HEXO (TSX:HEXO)(NASDAQ:HEXO) stock is on a downward spiral, and there is little hope it is going to recover soon.

A prominent cannabis stock has plunged by 75% in 2022, as the company’s losses continue to mount in the face…

Fire & Flower is a cannabis retailer well-positioned for growth thanks to its digital and delivery initiatives.