Canada has had its fair share of millionaire-maker stocks in the past. Some of these companies made people vast fortunes overnight. Two of these stocks, which still exist today, can only be found on the NASDAQ. However, these companies are still Canadian companies, both having their headquarters in the country. These two stocks are Lululemon Athletica (NASDAQ:LULU) and Tilray (NASDAQ:TLRY).

Lululemon has been a steady gainer for the past decade. The company effectively popularized the athleisure trend and has ridden that wave to enormous profitability and brand value.

The company is a Canadian company and is still headquartered in Vancouver, British Columbia. Although it previously had a Canadian stock listing, it de-listed from Canada in 2013 and went to a single listing on the NASDAQ at that time. The company cited additional administrative costs from maintaining dual listings as well as the thin trading volume of the Canadian-listed shares as the reasons for the de-listing.

Lululemon has 491 stores globally as of February 2020. This includes relatively new markets, such as China. The company has also invested heavily into its e-commerce platform, which has enabled it to thrive during and following the pandemic. It will be interesting to see how Lululemon integrates its recent acquisition, Mirror, into its broader strategy and vision.

The company’s shares could be had for under US$3 back in February 2009. Those who bought shares then and held on through July 2020 have made an eye-popping 8,860% return in that time. 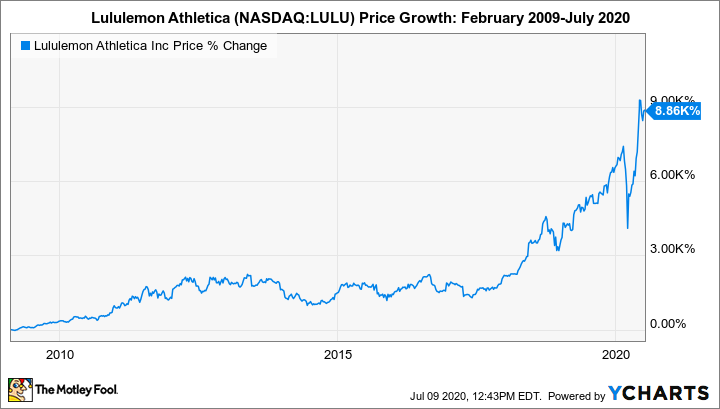 An early Canadian player in the medical cannabis sector, long before recreational cannabis became legal in October 2018, Tilray is a Canadian company and is headquartered in Nanaimo, British Columbia. The company never had a Canadian listing and opted to go public directly on the NASDAQ. This was a first for a Canadian cannabis company.

Tilray went public at $17 per share. Shortly after, it shot up to $300 per share, making many of its early owners multi-millionaires. However, like the rest of the cannabis industry, Tilray’s stock price came back down to earth. While the company doesn’t have a significant institutional investor, like some other companies, it has successfully struck major partnership deals with leading global brands including Anheuser-Busch InBev SA/NV.

Is being on the NASDAQ better?

Tilray certainly took an unconventional path to the U.S. market. This is in stark contrast to the strategy taken by competitor Canopy Growth (TSX:WEED)(NYSE:CGC).

Canopy entered the public markets in its previous form as Tweed via a reverse takeover in 2014. It began its life on the TSX Venture. Eventually, the corporate name changed to Canopy Growth Corporation in 2015. Following early success in the capital markets, Canopy graduated to the TSX in 2016. Canopy listed on the NYSE in 2018. Recently, in 2019, it became the first cannabis company to join the S&P/TSX 60.

While Canopy was able to rack up similar gains as Tilray, it was over a longer period of time. Canopy simply did not see the meteoric rise that a stock like Tilray saw. U.S. listings alone don’t explain this, since Canopy listed in the U.S. in 2018, during the peak of Canadian cannabis frenzy. The combination of an IPO and being on the NASDAQ may have exposed Tilray to a greater number of investors at a pivotal time in its growth.

However, Tilray only listed a very small percentage of its outstanding shares when they went public. I believe that this scarcity of shares also played a large factor in the sudden share price spike. In short, being on the NASDAQ certainly wasn’t the only factor behind Tilray’s IPO success.

If you’re looking for Canadian stocks, be sure to keep your eyes peeled for opportunities on exchanges south of the border. Not considering these opportunities could mean that you miss out on the next big Canadian 100-bagger.

The Motley Fool owns shares of and recommends Lululemon Athletica. Fool contributor Kyle Walton has no position in the companies mentioned.