When it comes to Air Canada (TSX:AC) stock and Cineplex (TSX:CGX) stock, it’s about surviving through the pandemic. Which is a better contrarian buy?

The first COVID-19 case was detected on December 31, 2019, but the situation really started looking serious in March, as global cases started surging. So, it’s a good exercise to take a look at the year-to-date price action of the two battered stocks. 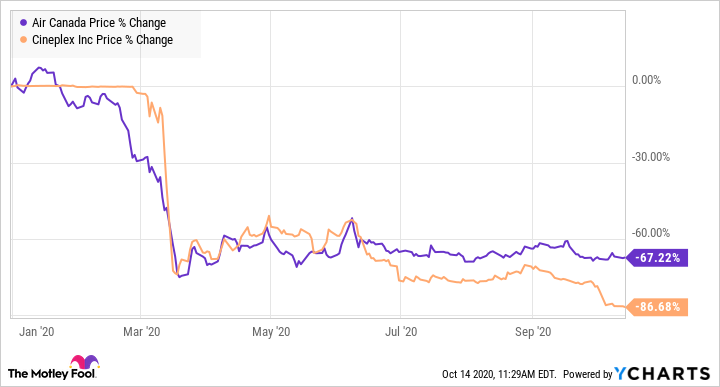 Air Canada stock has declined 67%, while 86% of Cineplex stock’s market cap is shaved off. This immediately suggests that Cineplex is facing more troubles than Air Canada.

Which of AC stock and CGX stock is more likely to survive?

Which of Air Canada stock and Cineplex stock has a greater chance of surviving the next year?

Investopedia explains that “the current ratio is a liquidity ratio that measures a company’s ability to pay short-term obligations or those due within one year. It tells investors and analysts how a company can maximize the current assets on its balance sheet to satisfy its current debt and other payables.”

The Altman Z-score is a formula that can be used to predict the probability of a company going bankrupt. The formula takes account of the company’s profitability, leverage, liquidity, solvency, and activity ratios.

Air Canada’s Z-score is 0.7, down from 1.2 a year ago. Cineplex’s is zero, down from 0.9. So, both companies have a higher probability of becoming insolvent longer term compared to a year ago, if the current challenging operating environment persists. However, Air Canada is in better shape versus Cineplex.

Due to COVID-19 and air travel restrictions, in the second quarter (Q2), Air Canada’s revenue plunged 89% against the prior year’s period. For the first half of the year, its revenue dropped by 54%.

In its Q2 news release, Air Canada projected “a net cash burn of between $1.35 billion and $1.6 billion (or between $15 million and $17 million per day, on average) in the third quarter of 2020.” This projection includes capital expenditures and lease and debt-service costs.

Although it had a Q2 operating loss of nearly $1.6 billion, Air Canada was able to increase its liquidity to north of $9.1 billion.

Due to forced closures, Cineplex’s Q2 revenue plunged 95% against the prior year’s period. For the first half of the year, its revenue dropped 62%.

Cineplex’s Q2 cash burn was close to $54 million, which averaged almost $18 million per month. At the end of Q2, Cineplex had $13.8 million of cash.

Assuming the pandemic goes away quickly, both AC stock and CGX stock can rocket much higher. However, given that we don’t know how long the pandemic will stay for and Air Canada has a greater chance of survival, between the two, I’d place my bets on Air Canada.

Currently, the average 12-month price targets suggest 35% and 135% upside potential, respectively, for AC stock and CGX stock. This estimate also implies Cineplex is a riskier bet in the near term.

Think Air Canada and Cineplex are too risky? Consider these other battered stocks...