Emera (TSX:EMA) and Hydro One (TSX:H) are regulated utilities that investors may be interested in buying and holding the stocks for passive income. Let’s compare the two to see which dividend stock may be a better buy right now. 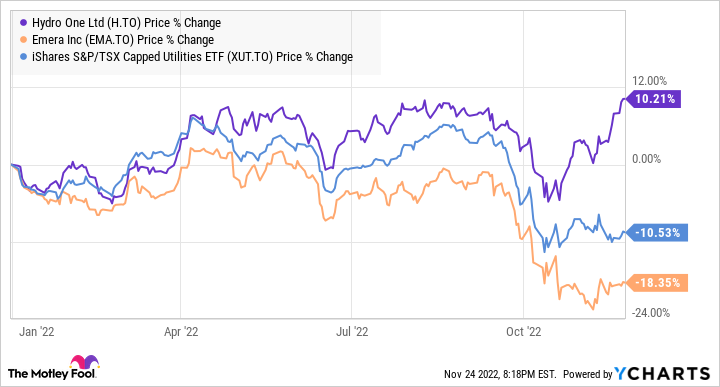 Although both utility stocks are large caps and have similarly low betas of about 0.25, Hydro One has had much lower volatility. One aspect that attracts investors to utility stocks is their low-volatility nature. In other words, they can be stabilizers for your diversified investment portfolio.

In this sense, Hydro One stock should be praised for being more resilient. Other than falling less during the correction, it has also rebounded already with a gain. In comparison, Emera stock has been an underperformer that also fared worse than the sector. The situation is similar when comparing total returns in the period.

Hydro One takes a leading position as a regulated electric utility in Ontario, Canada’s most populous province. It consists of 99% in regulated transmission and distribution assets, which provides the foundation of highly stable business performance. It enjoys a S&P credit rating of A-. For the first nine months of the year, its revenue increased 8.7% and diluted earnings per share (EPS) increased 8.2%.

Emera is a regulated electric and gas utility that provides more diversification. Currently, it makes 63% of its earnings from the United States. However, it makes close to half of its earnings from Florida. Its main focus will stay in Florida as 75% of its capital plan is in the U.S. state. The utility has an investment-grade S&P credit rating of BBB. Its year-to-date adjusted EPS growth was 5%.

Hydro One’s recent rate base growth was approximately 6%. It will have a new distribution rate application for 2023 to 2027 that could change this growth rate. Based on the recent changes in other regulated utilities, my guess is that its new rate-base growth could be 5-6%.

Since 2016, Emera stock has increased its dividend by 6.4%. At writing, it yields just under 5.4%. Its TTM payout ratio is about 67% of earnings. Emera forecasts its rate base growth to be 7-8% through 2025. Consequently, management believes healthy dividend increases of 4-5% is possible through 2025.

Should you buy Emera stock or Hydro One?

Since 2016, Hydro One stock has delivered annualized returns of about 9.8%. For Emera stock, it was 6.5%. Were it not for the recent selloff in the stock, its total returns would be over 9%.

I believe the correction makes Emera stock a better buy right now. Although it’s a higher-risk stock given its worse credit rating, it provides a bit more value than Hydro One. Given its higher yield (that’s still safe), better value, and stable growth, it should deliver higher returns for investors (who can stomach the greater risk) over the next three to five years.

Defensive investors, who think Hydro One is a better fit for their low-risk portfolio, should wait for a dip in H stock before considering purchasing.

CAPREIT may not look like a deal at the outset, but long-term growth projections would disagree – especially when considering…

2 Recession-Resistant Stocks to Buy for Steady Gains in 2023

Investors worried about a recession can look to buy utility stocks such as Hydro One and Waste Connections right now.

Few companies are truly “too big to fail,” but most market leaders are far more resilient against market headwinds or…

Looking for $200/Month in Alternative Income? Buy 530 Shares of This Stock

Do you want to earn $200 monthly alternative income for the next few years? Then accelerate your investments in this…

Invest in RNW stock and 2 other TFSA friendly names before this fast-approaching deadline to get the full 2023 dividend.

Passive Income: How to Earn Nearly $367 Per Month in Your TFSA Portfolio

After the recent bounce, It may be smart for investors to wait for a dip before they buy these solid…