If you’re looking for an outperformer for your portfolio, Magna International Inc. (TSX:MG)(NYSE:MGA) fits the bill. After piling on a massive 46% in 2014, the stock continues to outperform the broader market this year. In fact, Magna’s performance over the past five years could put the S&P TSX to shame. Note that the big drop in Magna’s price change last week is the effect of a two-for-one stock split. 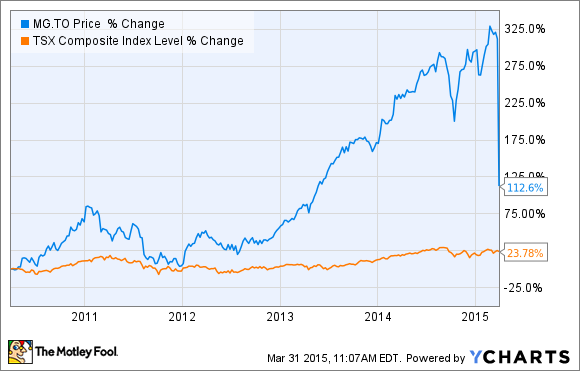 But as every prudent investor knows, past performance is no guarantee of future returns. So, you need better reasons than absolute stock price changes to consider Magna worth your money. Worry not, because Magna’s recently released annual report for 2014 gives us several reasons to be bullish about the stock.

Strong customer base and fast-growing sales

Magna generated record revenue worth US$36.64 billion in 2014. In fact, breaking its own records has become a new norm for the company, with sales growing more than twofold since 2009.

Magna bears may argue that this uptrend could be nearing an end, what with the company projecting lower sales (US$33.1-34.8 billion) for 2015. But here’s what investors need to know: decline in Magna’s revenue this year, if any, will likely be the result of uncontrollable factors like currency fluctuations, not lower production or demand.

In fact, LMC Automotive projects U.S. retail auto sales to increase 3% to 14 million units this year. As one of the world’s leading auto parts suppliers that counts General Motors, Ford, Fiat-Chrysler, BMW, Daimler, and Volkswagen as key customers, Magna is poised to benefit from the ongoing strength in the auto industry.

While growing top line is a healthy sign, investors want to see incremental revenue translate into higher profits. Magna leaves no room for complaints there: Its operating profit jumped 32% and net income climbed 21% to US$1.88 billion in 2014. Magna’s profits have grown steadily in recent years, as shown below.

Aside from higher revenue, restructuring efforts, especially in Europe, have also boosted Magna’s margins. I’d expect the trend to continue this year, since the company doesn’t expect lower revenue to hurt its margins. In fact, Magna raised its 2015 operating margin outlook slightly to a “low-to-mid-7%” range from the earlier projected low 7%, despite the expected fall in revenue. Long story short, Magna should continue to earn higher profits.

With profits growing, Magna’s cash flow has also grown over the years. It generated US$2.8 billion in cash from operations in 2014 compared to US$2.5 billion and US$2.2 billion in 2013 and 2012 respectively. With US$1.2 billion in free cash flow for 2014, Magna is among the few companies that are generating greater cash flow than net income.  That’s an excellent sign of management efficiency.

What’s more, for all the cash that Magna is generating, it currently holds only about US$811 million in long-term debt. Such a solid balance sheet gives the company enough leeway to grow without getting saddled by debt.

Where’s all the money going?

For a company generating strong cash flows, the key to growth lies in efficient allocation of capital. Magna is striking a fine balance between ploughing cash back into its business and returning part of it to shareholders.

In 2014, Magna invested nearly US$1.8 billion into its business. From expanding facilities to acquisitions, the company channeled its resources into various growth avenues. Notable projects include expanding into India with two new facilities, and collaborating with Ford for a multi-material lightweight vehicle concept that aims to reduce a standard car’s weight by 25%.

But are Magna’s investments paying off? Considering that the company’s return on invested capital climbed from 12% to 18% over the past three years, the answer is a resounding yes. Likewise, Magna’s return on equity has risen from under 13% in 2011 to 20% last year.

What about shareholder returns? That’s another pretty picture.

Magna returned a whopping US$2.1 billion to shareholders in 2014 in the form of dividends and share repurchases. Magna increased its quarterly dividend by 16% to $0.44 a share in the fourth quarter last year. The company also announced a two-for-one stock split, which effectively makes its quarterly dividend US$0.22 a share (or $0.2817 a share).

Magna also repurchased 17.5 million shares in 2014 and already has an ongoing buyback program. In other words, shareholders can continue to expect greater returns from Magna in 2015 and beyond.

Strong operational performance, solid financials, growing returns on investments, and great shareholder returns—There’s not much an investor can ask for. Magna has all the elements of a great stock, and if you can buy and hold it for a long period, you’ll likely be richly rewarded.