The Motley Fool Canada » Investing » Where Is Potash Corporation of Saskatchewan Inc. Headed After Crashing 43% in 2015?

This year will go down as a year that investors in Potash Corporation of Saskatchewan Inc. (TSX:POT)(NYSE:POT) will want to forget. The stock has tanked nearly 43% year to date as of this writing, hugely underperforming the broader market and peer Agrium Inc. (TSX:AGU)(NYSE:AGU). 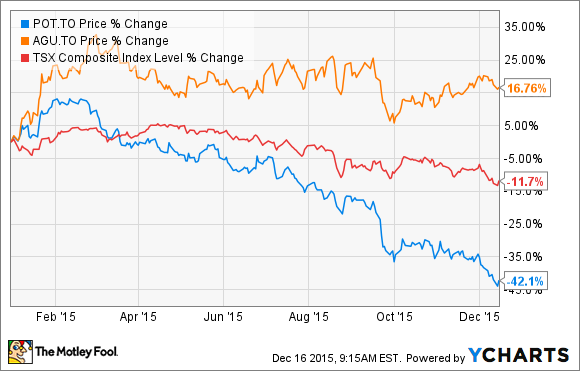 So why did the market dump Potash shares this year, and what’s in store for investors in 2016?

Potash started the year on a strong note, reporting 77% growth in Q4 profit in January, even as Agrium’s Q4 profits halved. Unfortunately, the excitement fizzled out soon after when Potash lowered its full-year guidance to US$1.75-2.05 per share from US$1.90-2.20 projected earlier following a dismal first quarter.

An unprecedented change in the Government of Saskatchewan’s potash royalty scheme proved a double whammy, even as weak nutrient prices hit Potash’s profits. The stock was down about 10% by mid-year.

And then the big news came in: Potash made an $8.7 billion takeover offer for German potash company K+S as it eyed a bigger share of the global potash market. K+S rejected the bid, and it was only in October that Potash officially withdrew its offer, blaming “a lack of engagement by K+S management.”

But the suspense and fears that Potash could end up overpaying for a high-cost, low-cash flow company amid weak potash markets took a toll on the stock–it was down nearly 30% by the time Potash pulled its bid for K+S.

Meanwhile, the fertilizer markets deteriorated, and Potash downgraded its full-year guidance yet again. For now, the company expects to earn US$1.55-1.65 per share, suggesting a 9% drop over last year at the higher end of the range. In sharp contrast, Agrium expects its 2015 earnings per share to grow at least 29%, driven by a resilient retail business, lower input costs, and aggressive cost-reduction efforts.

The chances appear dim on the surface. Demand for potash from key consuming regions, Asia and Latin America, has weakened, so much so that Potash has advanced the closure of one of its mine, while temporarily shutting down three other mines this running quarter to curtail production.

However, Potash is ramping up its low-cost mine at Piccadilly, even as it shuts down the relatively higher-cost Penobsquis mine. That should boost the company’s margins.

More importantly, Potash’s free cash flow is expected to grow substantially in the near future as it wraps up a multi-year expansion program. While Potash may look for investment opportunities on the lines of K+S, investors can continue to expect high returns in the form of dividends and share repurchases.

Potash should turn around as fertilizer prices bottom out. So the downside appears limited going forward. In fact, at a P/E of below 10 times and a huge 8% dividend yield, Potash looks like the kind of stock you’d want to add to your watch list for 2016.

Fool contributor Neha Chamaria has no position in any stocks mentioned. Agrium Inc. is a recommendation of Stock Advisor Canada.