With the big names in the oil industry, it’s not uncommon for little-known oil stocks with huge growth potential to get overlooked. Pembina Pipeline Corp. (TSX:PPL)(NYSE:PBA) is a fine example. After underperforming heavyweight peers like Enbridge Inc. (TSX:ENB)(NYSE:ENB)  for a long time, it’s only recently that Pembina has caught the market’s attention. 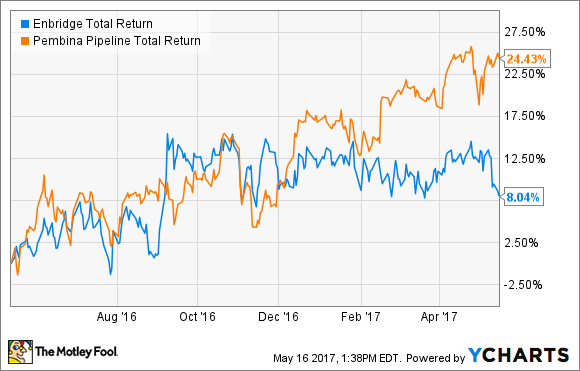 Investors who are wary about buying the stock at current prices could be making a big mistake; for all you know, Pembina’s best days may have just begun.

Taking a leaf out of Enbridge’s books

Right now, Pembina’s growth potential revolves less around macro factors and more around management’s aggressive efforts. While its recent investments are paying off, Pembina’s plans to acquire Veresen Inc. (TSX:VSN) in a deal worth $9.7 billion could double its enterprise value and give it significant headway in the midstream energy space. Pembina’s move comes close on the heels of rival Enbridge’s acquisition of Spectra Energy to create North America’s largest energy infrastructure company.

Analysts at J.P. Morgan believe Pembina stock has the potential to hit US$52, representing nearly 62% upside from current levels. Three factors could push the stock to that price point.

Pembina’s first quarter was a quarter of new records with revenues from gas services and volumes from its midstream natural gas liquids and conventional pipeline segments each hitting record highs. Pembina’s volumes hit two million barrels of oil equivalent per day during the quarter.

As a result, Pembina’s Q1 revenues surged 46% year over year, and net income more than doubled to $215 million. For perspective, Pembina’s full FY 2016 net earnings were only around $466 million. In short, Pembina is growing at a torrid pace.

After bringing projects worth nearly $1.2 billion online in FY 2016, Pembina expects to press nearly $4 billion worth of capital projects into service this year. These include the completion of a $2.4 billion phase three pipeline project extending from Fox Creek to Namao, Alberta. Encouraged by the capacity demand along this area, management is already progressing with phase four and phase five expansions and expects to wrap them up by the end of 2018.

After the Enbridge-Spectra deal, Pembina management knew it had to push harder to remain one of the top companies in its industry, which is why it announced plans to acquire Veresen. Will not only expand Pembina’s reach in existing markets but will also give it leeway in other lucrative resource plays.

Management expects to close the deal by the end of this year and has already promised shareholders a dividend increase of 5.9% upon the closure of the acquisition. Just this April, Pembina raised its dividend by 6.25%, making it its sixth consecutive year of dividend increases.

Dividend lovers couldn’t ask for more. Pembina already yields 4.6%. And if you think Pembina stock could cool off now that it’s trading at a steep P/E of 35 times, the stock’s forward P/E of 26 times suggests significant upside potential in its earnings. Combine that with its growing dividend, and there’s no stopping Pembina stock.