It’s barely three months into 2019 and the S&P/TSX Composite Index is already up nearly 13.5% so far, which means the market has recovered all of its losses from 2018 and then some, which is a great start. However, there are several stocks in one industry that are hugely outperforming the TSX: gold stocks.

Gold prices have been pretty firm so far in 2019 thanks largely to the volatility in global stock markets that increases gold’s appeal as a safe-haven asset. Some gold stocks, however, have shot through the roof for reasons beyond gold prices. Three of them are Eldorado Gold Corporation (TSX:ELD)(NYSE:EGO), Alamos Gold Inc. (TSX:AGI)(NYSE:AGI), and Osisko Gold Royalties Ltd. (TSX:OR)(NYSE:OR).

With 50% year-to-date gains, Eldorado is easily the best-performing gold stock for 2019 so far. Credit goes to recent developments at the miner.

You see, Eldorado has been under tremendous pressure for a couple of years now ever, as its key development projects in Greece, particularly Skouries mine, were stalled because of regulatory concerns and production at its flagship mine — Kisladag in Turkey — fell short of projections.

Eldorado now foresees its gold production jumping more than 50% by 2020. That’s encouraging, but much of the optimism seems to be baked into the share price for now as it remains to be seen whether Kisladag delivers and how the upcoming elections in Greece could affect Eldorado.

Alamos Gold is firing on all cylinders. Its gold production jumped 18% in fiscal 2018 to record highs of 505,000 ounces. Alamos expects similar production for 2019 but at a lower cost thanks to contribution from its Young-Davidson and Island Gold mines.

By the second half of 2020, Alamos’s capital expenditures should taper off and its recent growth moves should start to pay off. That means Alamos is closer to generating positive free cash flows. By 2021, Alamos expects annual gold production to cross 600,000 ounces as its Kirazli mine in Turkey comes online. 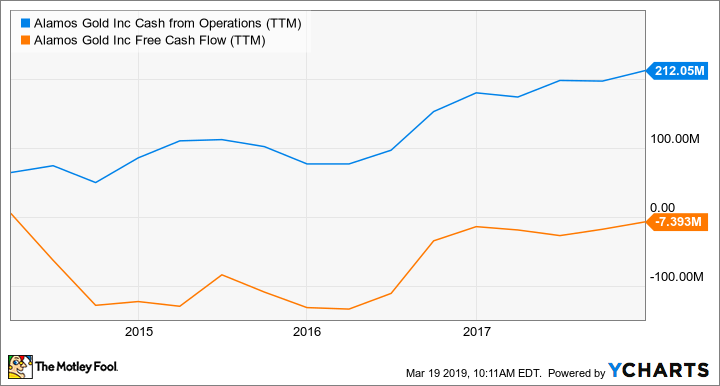 Alamos is a well-diversified gold miner with operations in Canada, Mexico, and Turkey, has a manageable debt, and is steadily growing its gold reserves and production. Its growth plans offer great cash-flow visibility, which should eventually reflect in its share price. At nine times price-to-cash flow, Alamos stock looks attractive to buy and hold for at least a couple of years.

Unlike Eldorado and Alamos, Osisko doesn’t mine gold, but buys them from third-party miners under royalties or streaming agreements. In return, Osisko finances the miners upfront.

Osisko has tie-ups with high-potential assets, including Canada’s largest gold mine, Canadian Malartic, which is owned jointly by Yamana Gold and Agnico-Eagle Mines. Osisko doesn’t have to bear any costs and risks associated with mining, making it a lucrative business model.

Osisko expects GEOs to rise to 85,000-90,000 in 2019, which means the company will likely deliver yet another record sales- and- cash- flow year in 2019. That should keep the ball rolling for Osisko stock, which also offers one of the highest dividend yields in the gold industry at around 1.3%.