A successful investor doesn’t just want to earn good returns but tries to beat the market. Otherwise, you might save yourself the hard work of researching stocks by simply investing in an index fund that tracks the S&P/TSX Composite Index. But then you’ll have to deal with low returns or even losses if the markets were to fall.

This year, for instance, the TSX is down about 3% so far. Comparatively, some stocks aren’t just beating the market, but absolutely crushing it. 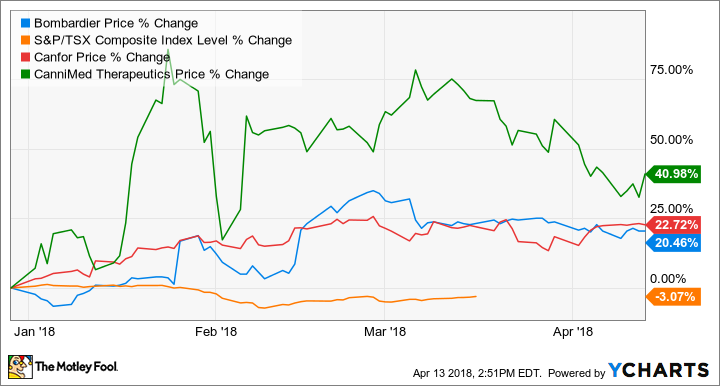 Here’s why these stocks are outperforming the TSX.

Bombardier stock’s rally picked up pace late last year when a series of positive news fueled investor optimism. A deal with Airbus to co-produce the CSeries followed by management’s renewed focus on debt reduction and cash generation sent Bombardier stock soaring towards the tail end of 2017.

In January, the favourable settlement of a trade dispute with Boeing Co. relating to the sale of CSeries passenger jets to Delta Air Lines, Inc. drove Bombardier shares higher, as investors hoped the worst was behind the CSeries program.

The biggest upswing came mid-February after Bombardier blew estimates away for fourth-quarter and fiscal 2017 numbers. For the full year, Bombardier’s operating margins came in above 8% for its transportation (rail), business aircraft, and aerostructures segments, and it ended the year with $3.1 billion in cash.

Bombardier believes 2018 will be a “pivotal year.” Management also has encouraging mid-term goals, aiming to grow revenues by $4 billion to greater than $20 billion, maintain operating margins above 8%, and generate sustainable free cash flow of $750 million-$1 billion annually through 2020.

Canfor, a leading forest products company, is riding the wave of a strong housing market in the U.S. and bottlenecks in railroads that have sent prices of lumber soaring.

Management foresees strong price realizations and demand for 2018, even as it continues to cut costs, which is why several analysts have upped their rating and target on Canfor stock in recent months.

CanniMed Therapeutics stock shot through the roof in January after news of a potential takeover by Aurora Cannabis Inc. (TSX:ACB) floated around. Days later, the companies finalized the deal, with Aurora agreeing to pay a whopping $1.1 billion, or nearly double per-share value compared to its earlier unsuccessful bid for CanniMed.

Aurora will now likely seek CanniMed’s delisting from the TSX in coming months. Investors’ focus, therefore, must be on Aurora and its future prospects. Interestingly, Aurora shares have dropped nearly 11% so far this year, thanks to the expensive takeover.

Aurora, however, is growing aggressively, especially in the medical marijuana space. The CanniMed acquisition makes it an even larger player now — a position that should steer the company to better days in coming years.

Should you buy any of these stocks?

Each stock discussed above has its fair share of risks. If production delays and share dilution could dampen Bombardier’s prospects, CanniMed shareholders who are now sticking with Aurora want to see the company unlock value from the acquisition. For Canfor, lumber disputes with the U.S. remain a risk.

While the long-term stories for each stock are still encouraging, you might want to wait for a better price to enter.