On Wednesday, the S&P 500 Index set the record for the longest bull-market in history. How long you ask? According to reports, it became 3,453 days old. Since bottoming out on March 9, 2009, the Index has risen more than 300%!!

If you are solely invested in Canadian equities, you might be wondering what all the fuss is about, as the S&P/TSX Index has chronically underperformed the U.S. markets over the past number of years. Take a look at the following chart: 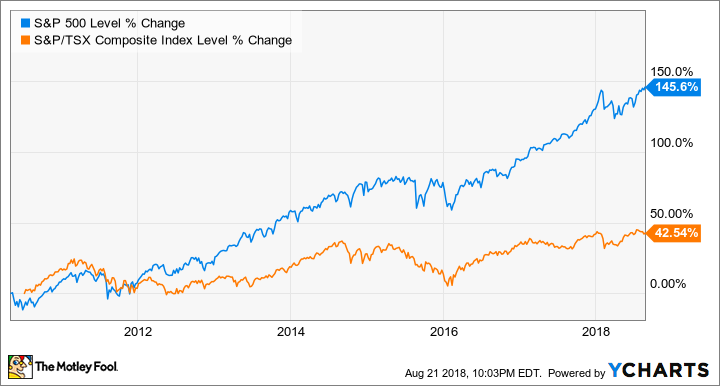 As you can see, the S&P 500 has outperformed the TSX Index by a three to one ratio. This outperformance began in earnest at the beginning of 2012 and has continued ever since.

You might be asking yourself, why? The answer boils down to one issue: diversification.

The TSX is highly weighted towards three sectors: financials, energy and materials. Combined, these three sectors account for 65.1% of the Index. Considering all three have struggled, they have had a negative impact on the overall performance of the Canadian Index.

Outside of the big banks, the financial industry still hasn’t fully recovered from the financial crisis. In particular, insurance companies have been slow to rebound. Gold, silver and other precious metals have been a significant drag. Prior to a rebound in oil prices this year, the energy sector underwent a five-year bear market.

Where is Canada’s Silicon Valley?

Not only is the TSX home to significant industry underperformers, it also lacks representation in high-growth sectors such as Information Technology (IT). The S&P 500 has benefited significantly from its IT weighting. The sector accounts for approximately 25% of the Index and is home to some of the best performing stocks of the past decade, such as Neflix, Amazon, Facebook and Apple, to name but a few.

Unfortunately, Canadians haven’t benefited from this tech boom. The IT sector accounts for only 3.9% of the TSX Index, which ranks it ninth out of the 11 sectors. Shopify (TSX:SHOP)(NYSE:SHOP) is Canada’s most notable, and it has performed admirably. Since its IPO in 2015, the company has returned almost 400%!

A few more of these and you can see how it could dramatically alter the composition and performance of the TSX.

The record bull run is a reminder for Canadian investors to diversify outside the country’s borders. The TSX will inevitably outperform the S&P at some point, as it had from 2001 to 2012, but is highly dependent on three sectors to do so. A balanced portfolio should contain a mix of Canadian and U.S. equities.

The best part? It is easy to invest in U.S. stocks, as most brokerages allow trading directly on the U.S. markets.