Home » Investing » This Chart Shows Why Aurora Cannabis Inc. (TSX:ACB) Might Be the Best Pot Stock to Buy Today

Pot stocks have been on the rise lately, though not all pot stocks are up this year. A quick look at the chart below shows some big winners thus far, but that hasn’t been the case across the board: 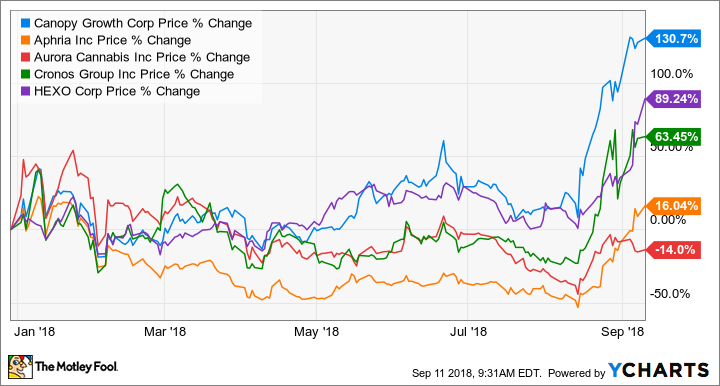 The stocks with the highest returns on this list have recently announced deals. Big-name beverage makers and Cronos Group Inc. had a big announcement last week that could potentially make operations more efficient than their peers. Aphria Inc, despite not announcing a deal of its own, also got a boost in share price around the same time as the others — presumably just for being a cannabis stock.

It’s also evident from the chart that all the acquisitions that Aurora Cannabis Inc. (TSX:ACB) has been involved in recently have had a negative impact on its share price, which is why the stock is down so much this year.

Why this should make investors bullish on Aurora’s stock

A big reason why I’d consider investing in Aurora today is that we know it’s not going to sit idly by while its competitors sign up with big beer makers. In all likelihood, it too is working on landing a deal of its own, and rumours were swirling that Smirnoff-producer Diageo was looking for a partner, although no indication was given as to the company that would be involved or whether a deal would even be reached.

Whether or not Diageo turns out to be Aurora’s partner, it’s likely that it’s going to find one eventually, and when that happens, the stock will skyrocket. Aurora is not a company that is content with being second best in the industry, as is evidenced by the deals that it has been a part of over the past year.

By the same logic, you’d expect it wants to get a big name to partner with in preparation for the craze that will inevitably be cannabis-infused beverages.

It seems to be only a matter of time before that happens, but with edibles expected to be legalized sometime next year, there isn’t a whole lot of time to spare, as the development won’t be an overnight process. Investors who are thinking of buying should decide quickly, as this industry has been moving quickly.

I’d be the first to say that cannabis stocks are overvalued and far too expensive for value investors to consider. But I’ve also seen what a big development can do for stock prices, especially in the marijuana industry.

Earnings reports have been secondary, but a new technology, expansion into a new market or a big acquisition can have a much bigger impact on share price than anything else.

While Aurora’s stock won’t likely replicate the enormous returns it achieved in 2017, I’d be surprised if we don’t see it turn things around this year.