It seems like the cannabis sector is going through a bit of a dry spell of late. It’s not that stocks have started to do badly, but we’re not seeing the gangbuster days of last summer either.

It can be hard to judge whether to buy, hold, or sell certain cannabis stocks. But of these three, there are two I would definitely keep an eye on and one I would put in the “do-not-buy” pile. 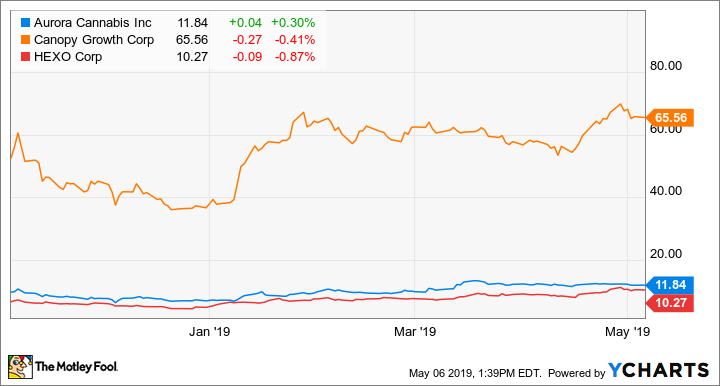 Aurora Cannabis (TSX:ACB)(NYSE:ACB) is one of those stocks that has been going through a waiting period for investors. The company has been experiencing expansions and acquisitions that have made shareholders nervous.

That’s because there hasn’t been a lot to prove anything is working for this company. It has cash on hand — about $379 million of it. But the company has chosen to finance deals with common stock, diluting shares.

Some think Aurora is saving up its cash to become even more of an international company, with production or distribution presence already in 24, rather than depending solely on the United States. It’s something the company is prepared to tackle, with 500,000 kilograms being produced by mid-2020, and 625,000 planned for the future, giving it the highest production capacity in the industry.

But until the company can fix its super-high P/E ratio and its RSI of 53, and perhaps partner with another big company, it may need more than Nelson Peltz to convince investors to keep buying.

Canopy Growth (TSX:WEED)(NYSE:CGC) might be the biggest of the marijuana stocks, but it doesn’t mean it’s been performing the best. While the stock did receive a bit of a boost at the end of April, it has since flat-lined again around the $65 mark.

And analysts are worried that in the next 12 months, this stock will either sink or soar to between $40 and $100 per share. While its partnership with Constellation Brands gave it a tonne of cash to work with, the company has yet to really put that money to work through either acquisitions, broadening its portfolio, or entering the U.S. market in any tangible way.

It plans to develop a plant in New York State. It’s planning of 4.3 million-square-foot space for production. There are plans to go global with 32 patents for products and technology. And while that’s all exciting on paper, it’s just that right now: on paper. Of course, some paper can be positive, such as the news the company acquired Acreage Holdings in the U.S., with $300 million upfront and $3.4 billion if the U.S. legalizes marijuana.

What it all comes down to is the earnings report, and analysts aren’t expecting anything crazy at this point. It’s more likely investors will need to keep looking towards the future for some serious growth.

Hexo (TSX:HEXO) may not be in the top three, but it’s still among some of the top contenders in the race to get as much of the marijuana market as it can. Most recently, the company acquired Newstrike Brands for $260 million, increasing the company’s size and reach and creating an entry point to the edibles market. This is on top of the company’s partnership with Molson Coors to focus on cannabis-infused beverages.

It’s perhaps this focus on the edibles and the consumable market that sets Hexo apart and has some analysts believing it has a solid place as one of the top marijuana producers. After all, this area will be sold at higher retail prices, giving the company’s already solid gross margin of 52% a boost.

What stock’s on fire and what’s in flames?

Canopy is the heavy hitter, and while the company has a lot in the pipeline, when it comes online, investors will be rewarded. I’d say it’s even still a buy.

Aurora just doesn’t have that solid foot in the U.S. that could take it from good to great. However, the news has sent shares to a level I’m comfortable with, considering it could be the top producer. So, I’m giving it a buy.

Finally, Hexo has a corner of the market, but it’s just that: a corner. It needs to expand, and I don’t think it will ever get there, putting a low cap on this already low stock. I’d say avoid this stock, as it just won’t go anywhere.