We learned this week that OPEC will keep production cuts in place until March 2020, extending the current agreement by nine months. The problem is that while this will likely help oil prices from falling below US$50 a barrel, it won’t do much else; production cuts have been used over the past few years and have failed to get oil prices back up to the highs they were at in 2014.

A lot has changed since then and U.S. production has risen, which has drastically changed the playing field. With U.S. companies unfazed by a lower price of oil, they have no incentive to restrict production, as a more efficient operation has allowed them to turn a profit at a much lower price of oil.

In Canada, the situation is complicated even further, as while rising oil prices are generally a good thing, Western Canada Select (WCS) is the key commodity price that producers in Alberta are worried about, and it normally trades at a discount to West Texas Intermediate (WTI). Thus, even if WTI is up, it may not translate into an identical improvement in WCS.

A good example of how minimal an impact rising oil prices can sometimes have can be seen on the chart below, which looks at both Enbridge Inc (TSX:ENB)(NYSE:ENB) and Canadian Natural Resources Ltd (TSX:CNQ)(NYSE:CNQ) stock prices over the past three years: 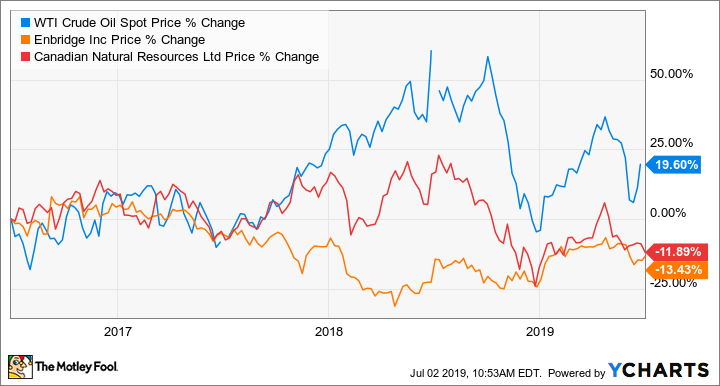 Even as oil prices were rallying in 2018, there wasn’t much of an improvement in Enbridge’s stock and CNRL saw only a modest improvement. Unfortunately, there are many factors that can weigh down oil and gas stocks, ranging from commodity prices to political issues and to even the overall economy itself. And so while one of those items or even multiple are doing well, that might not be enough to rally oil and gas stocks.

Are prices due to fall?

It’s becoming more and more apparent that production cuts need to stay in place just to be able to sustain the current level of oil prices. However, if U.S. production continues to rise or if demand falls, then the cuts might need to be even deeper. All this extension did was help to maintain the status quo and it would be a bit optimistic to expect that it will generate a big rally in commodity prices.

Ultimately, this is a big reason why oil and gas stocks haven’t returned to their previous levels. Although Enbridge has produced strong results in recent years, there’s simply too much risk in the industry. Whether it’s Enbridge or CNRL, stocks in the industry are fragile and investors have been a lot quicker to sell than buy their respective shares for just that reason.

We might see oil prices jump as a result of the extension, but over the long term, it’s hard to see a path where oil prices return back to US$100 per barrel. And even if they did, it still might not be enough for Canadian stocks to rally unless we see fewer political obstacles standing in the way.

Here are two undervalued U.S. stocks to diversify your investment portfolio. They both pay safe and growing dividends!

1 Dividend Juggernaut That Could Grow Fast in a Recession