Friday was an interesting day for CannTrust Holdings (TSX:TRST)(NYSE:CTST), to say the least. Initially, the stock was down as a result of a press release that said its auditors, KPMG, were pulling their most recent reports in light of the scandal surrounding the company and after CannTrust itself cautioned against relying on the most recent financials, including the year-end results.

It’s a move that made sense by KPMG and that, predictably, led to the stock declining to as low as $2.68 on the day. What wasn’t predictable was what happened later in the day: 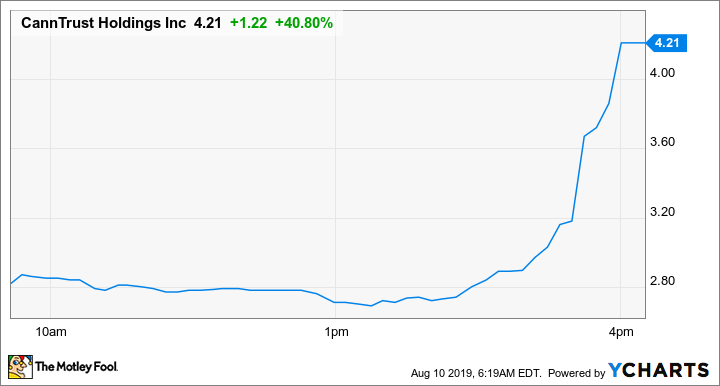 Not only did CannTrust reverse those losses toward the end of the day, but it would also hit as high as $4.57 — a price not seen since early July, when the stock was in the midst of a large sell-off, which happened soon after investors learned of the illegal growing scandal.

With movement like that, you might have expected some big (positive) news from Health Canada — some major development related to the scandal that all of a sudden changed the trajectory for the company. However, that wasn’t the case.

There was no press release, nothing to indicate there was any news-related item that led to the big surge in share price. There also wasn’t some broader development in the industry or in the markets as a whole that likely led to CannTrust suddenly becoming a more attractive investment.

What happened to the stock?

There’s no clear or definitive reason for the stock to have shot up towards the end of the day. What we do know is that the volume spiked up that day after trading lower in previous sessions. With more than 5.6 million shares traded on Friday, that was more than the three prior trading days combined. The last time that the stock had reached a higher volume was on July 26 when just under 6.4 million shares were traded.

What’s apparent is that there must have been a big order(s) late on Friday that pushed the stock up in price and that may have triggered more buying activity along the way. It’s not unlike what we saw happen with Bitcoin and its rally that began earlier this year where a large purchase jolted the cryptocurrency with some new life.

That’s why investing in a stock like CannTrust is very dangerous, since it’s prone to a lot of speculation. If you’re a prudent investor, it would be very difficult to justify investing in the company today, since until the scandal is resolved and we know what the punishment from Health Canada will be. There’s too much risk for the stock to be anything more than a gamble — especially since a licence suspension could result in the beginning of the end for the company.

Friday’s stock movement was a bit of mystery for such a seismic move in share price seemingly coming out of nowhere. And in a final twist, the after-hours markets saw the stock plummet by 16.4%.

The problem with CannTrust’s stock is that it is heavily influenced by speculators at this point, and that means there isn’t always going to be a sound, justifiable reason for how the stock does.