Home » Investing » Cannabis Stocks » Here’s How Your Returns Would Look if You Had Invested in Aphria (TSX:APHA) When Pot Was Legalized

Cannabis has undoubtedly been the hottest industry over the past couple of years. We’ve seen some soaring valuations and companies trade at ridiculous multiples of their sales. Even significant cash burn and mounting losses haven’t been able to keep investors away.

Recently, however, we have seen more bearish activity in the industry and valuations have started to come down, but not nearly enough to wipe away the growth that some stocks have achieved.

Earlier this month, we saw Aphria Inc (TSX:APHA)(NYSE:APHA) jump in value after it posted a profit and got investors excited about the possibility of a marijuana company actually not being in the red.

After all, it’s not a sight that we’ve seen very often, as normally cannabis companies are mounting losses and that hasn’t always gone over very well, especially when it brings down the earnings of a big investor.

How Aphria has done this past year

Aphria typically hasn’t been one of the strongest performing cannabis stocks, normally lagging behind the industry leaders. If we ignore the recent bump up in price that the company got from its earnings result, then through the first seven months of the year,

Aphria’s share price has actually fallen by about 9%. The stock was doing well until about April when a disappointing quarter sent the stock over a cliff.

However, let’s take a look back even further, to when marijuana was legalized, on October 17, 2018. Here’s how your returns would have looked if you had invested on that day: 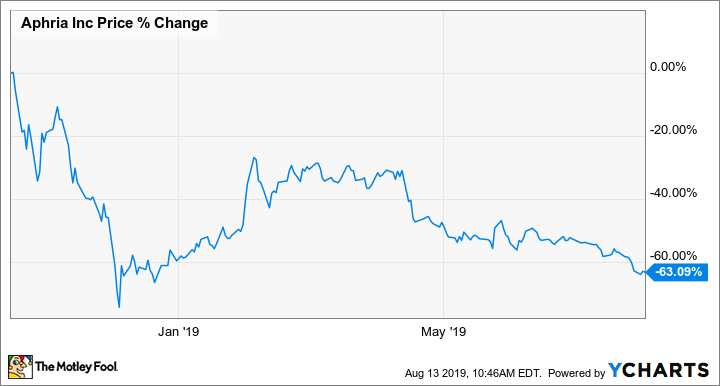 It’s a dark reality of how bearish investors have been on pot stocks since then. No longer are promises of future growth and potential enough to get investors excited about cannabis.

Even with the legalization of edibles around the corner, it hasn’t been enough to give prices a boost. If we extend the returns to the end of last week and include the boost that Aphria received from earnings, it’s still nowhere near enough to make up for the losses since legalization:

There are a couple of important takeaways from this.

The first is that leading up into legalization we saw cannabis stocks soaring even though the bullishness may not have been warranted, making the shares significantly overpriced.

Many of those investors likely sold off their shares with legalization having come and gone, knowing full well that reality had arrived and that it was time for companies to start performing and measuring them against the sky-high growth many expected for the industry.

It was a tall task — one that investors likely knew wasn’t going to happen. It’s an important reminder that hype alone can’t make a stock a good investment.

Another important takeaway is that as quickly as pot stocks soared, they have crashed just as quickly. Most of the losses that Aphria incurred since October took place in just the first few months after legalization.

With cannabis stocks still looking pretty expensive today, there may be another wave of sell-offs still to come.