The cannabis industry is relatively new with a lot of unknowns and uncertainties. Therefore, investing in weed stocks is speculative.

However, if you want to participate in the high-growth industry, and it isn’t a good opportunity to buy a global leader and the dominant player in the country (i.e., Canopy Growth (TSX:WEED)(NYSE:CGC)) after the stock has corrected by more than 50% from its high, I don’t know what is. 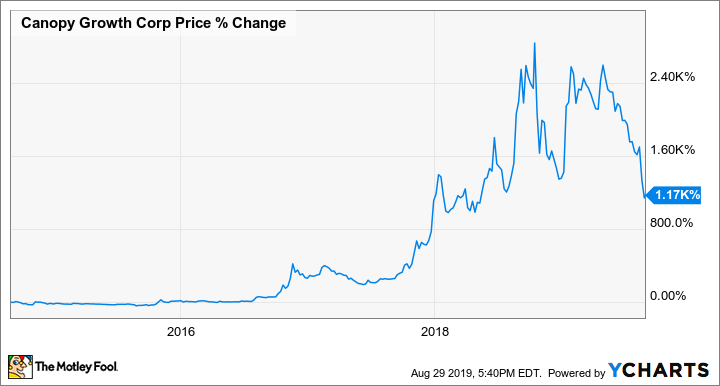 Analysts have an average price target of $56.60 per share on WEED stock, which represents a discount of more than 40% or upside potential of 77%!

For fiscal first-quarter 2020, Canopy Growth reported net revenue of $90.5 million, which was up 249% against the comparable quarter a year ago. The company increased dried cannabis sales in the Canadian recreational market by 94% over Q4 2019 and increased international medical cannabis revenue by 209% versus Q1 2019.

Canopy Growth harvested 40,960 kilograms, an increase of 183% over the prior quarter. This greatly exceeded its prior estimate of 34,000 kilograms. This is significant because the first-quarter harvest was the first full-scale harvest since it began retrofitting its large-scale greenhouse facilities in 2018, and with the majority of the work completed at the facilities, Canopy Growth will be shifting its focus on optimization to increase yield and lower cost.

Why the stock correction is a buying opportunity

What might have driven the stock lower is the gross margin compression; the margin fell from 43% a year ago to 15%.

Canopy Growth explained that the lower margin was predominantly due to operating costs related to facilities that haven’t begun production yet and a shift in product mix.

WEED’s gross margin should rebound meaningfully in subsequent quarters. In a recent press release, the company’s CEO, Mark Zekulin had a positive tone stating, “Fiscal 2020 is going to be another exciting time for the cannabis industry as we close in on the launch of new product formats. Our recent harvests are proof that our focus on operational excellence is working, and we look forward to showing both our Canadian and U.S. customers what we’ve been working on behind the scenes to prepare for the next wave of products coming later this year.”

At under $32 per share as of writing, WEED stock trades at about 34 times sales and two times book, which is a massive discount of 74% and 61%, respectively, from its five-year multiples. So, now is an opportunistic entry point for investors with a big appetite for risk and volatility and have an investment horizon of at least three years.

I fully expect WEED stock to be a bumpy ride. And that’s why I only bought a third of a position with room to add should it fall some more. If not, I’m happy trading this for short-term gains should the stock move materially higher.