Energy infrastructure stocks, such as TC Energy and Pembina Pipeline have done very well against stocks of oil and gas producers in general. So, it’s hard to imagine the stock of Tidewater Midstream & Infrastructure (TSX:TWM) falling off a cliff lately. 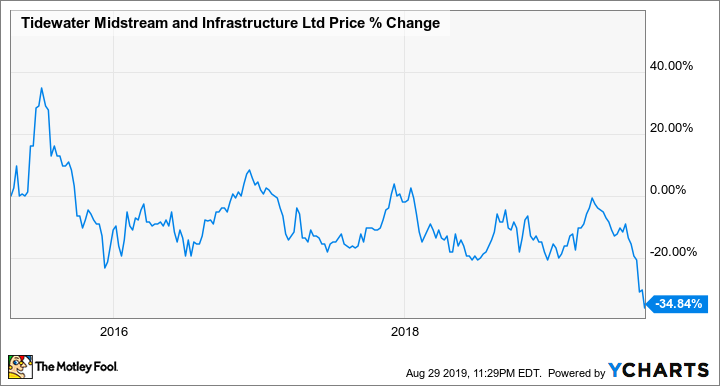 Reason one for the selloff

What partly caused the selloff is that Tidewater closed a $75 million five-year convertible debentures on August 8. Specifically, the debentures have a coupon of 5.5% per year and a conversion price of $1.86 per common share. This means that in the worst-case scenario, debenture holders can dilute existing shareholders by up to 11%.

Reason two for the selloff

Tidewater is a small energy infrastructure company. It has a market cap of about$388 million. The small market cap makes it easy for traders to manipulate TWM stock to go up or down. Distributable cash flow increased 2% to $28 million, or flat at $0.08 on a per-share basis. The payout ratio was about 25%, which appears to be conservative.

Total assets increased by 51% to $1.6 billion. And the debt-to-asset ratio increased from 22% to 28%, which remains reasonable.

Tidewater recently finished building the Pioneer Pipeline, a 120 km gas pipeline, which it operates and has a 50% interest in; TransAlta owns the other 50%. This pipeline is supported by a 15-year take-or-pay agreement with TransAlta. The pipeline started off flowing natural gas of 50 MMcf/day. By November, the throughput is expected to reach 130 MMcf/day.

Tidewater’s Pipestone Montney Gas Plant, a 100 MMcf/d sour, deep-cut Montney gas plant with acid gas injection and 20,000 bbls/d of NGL processing capability, is expected to be operational next month, and management is already evaluating for an expansion of the facility.

In July, when TWM stock was trading at roughly $1.30 per share, Joel MacLeod, Tidewater’s CEO, thought the stock was undervalued and stated his intention to buy about 5.5 million shares, which is worth roughly $5.56 million of stock, based on today’s market close price of $1.01. This is a big amount given that MacLeod already indirectly or directly owns more than $7.7 million worth of stock. Combined, the CEO would own about 4% of the company, which is a meaningful amount, because there is also other insider ownership. MacLeod is doing this strategic through a loan using the roughly 5.5 million shares of stock as collateral. Essentially, if he repays the loan within three years, he’ll be entitled to 100% of the upside of the shares.

If the CEO thought the stock was undervalued at $1.30, boy, he must think the stock is super undervalued now that it’s down 22% from that level.

Indeed, analysts are equally bullish on the stock. They have an average 12-month target of $1.50, which represents 49% near-term upside potential. Moreover, the energy infrastructure stock offers a yield of close to 4% to add to total returns.

2 Dividend Stocks to Set and Forget

I guarantee you haven't considered these dividend stocks as ones you can set and forget for decades, for a massive…

Fiera Capital is a quality TSX stock that pays investors a handsome dividend yield. Here's why this TSX dividend stock…

These three dividend stocks have soundly beaten the TSX in 2022. Here's why they could continue to outperform in 2023.

3 Underrated Dividend Stocks That Are Aristocrats in the Making

These three dividend stocks may not be Dividend Aristocrats yet, but it is highly likely they will be given their…