With the slowing sales of the iPhone as a backdrop, Apple (NASDAQ: AAPL) has been increasingly relying on other areas of its business to generate future growth. The company telegraphed its intentions in early 2017 when Apple CEO Tim Cook announced the audacious plan to double its services business by 2022.

Toward that end, the tech giant unveiled a diverse group of four new services at an event in April, including a subscription news service, a credit card, a monthly mobile gaming service, and a streaming video service. Apple News+ launched immediately for $10 per month, and the Apple Card debuted in August.

Apple finally pulled back the curtain on the two remaining offerings — Apple Arcade and Apple TV+ — at its product event this week, with the prices for these services surprising investors and Apple fans alike.

The company’s new mobile game entry, dubbed Apple Arcade, will be available via a new tab in the App Store on Sept. 19, for a monthly subscription price of just $4.99. It will feature a catalog of more than 100 curated, exclusive titles, which users can initially play on the iPhone and eventually across a host of devices, including the iPad, iPod Touch, Mac, and Apple TV.

The number of games will increase in the coming weeks, and Apple plans to add new titles every month. The launch includes a 30-day free trial for prospective subscribers. Apple said all the games could be played offline, and a single subscription would include access for up to six family members via the use of the Family Sharing feature.

The biggest news, however, was related to Apple TV+, the company’s long-awaited streaming video service. Apple revealed that it would launch on Nov. 1 with a monthly subscription price of $4.99 and a seven-day free trial. Additionally, the Cupertino company said customers that purchased a new device would “enjoy one year of Apple TV+ for free.” This was consistent with rumors that emerged late last year that the service would be free to owners of Apple devices.

The aggressive pricing by Apple was a surprise to many, as recent reports had suggested the company was considering a $9.99 price point.

Apple provided some details about its streaming offering at a star-studded event back in March, revealing a virtual who’s who of Hollywood elite that would be in front of and behind the camera creating Apple Originals, including Steven Spielberg, J.J. Abrams, M. Night Shyamalan, Ron Howard, Sofia Coppola, Reese Witherspoon, and Jennifer Aniston (not all of those big names have stayed with Apple — Abrams, for example, is reported to have withdrawn over issues of exclusivity). 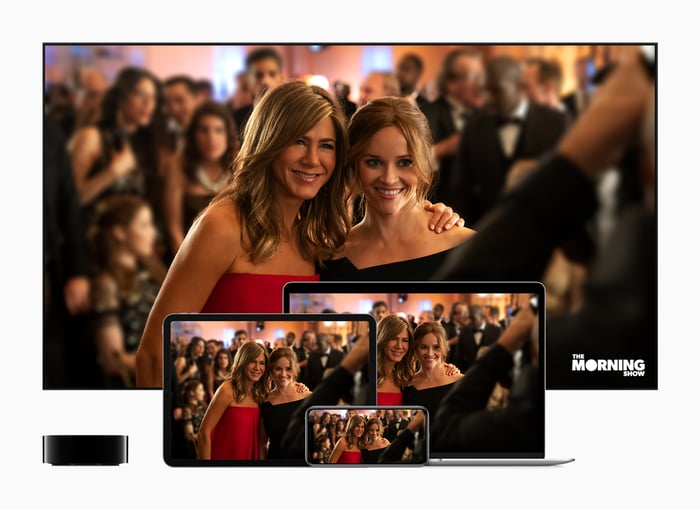 Reports have recently emerged that Apple’s content budget, which was originally set at about $1 billion, has since ballooned to more than $6 billion, ramping up spending to compete with big-name streamers like Netflix and the soon-to-launch Disney offering, Disney+.

Off to a slow start

Apple highlighted nine shows that will be available when Apple TV+ debuts in November. Compare that to the more than 500 movies and 7,500 episodes on Disney+ and the nearly 4,000 movies and an estimated 1,800 multi-episode TV shows on Netflix, and it’s easy to see why Apple was so aggressive with its pricing. Viewers can watch all that Disney+ has to offer for $6.99 per month, and Netflix’s least expensive plan clocks in at $8.99 per month, while both services offer far more available programming.

Apple will continue ramping up its content over time and is hoping that its aggressive pricing and free giveaways will keep customers around long enough to get them hooked on some of the new shows on Apple TV+ — and, in so doing, help the company boost its ever-growing services revenue.