The Motley Fool Canada » Cannabis Stocks » If You’d Invested $10,000 in Canopy Growth (TSX:WEED) at Legalization, This Is How Much You’d Have Today

Canopy Growth (TSX:WEED)(NYSE:CGC) has seen much better days. The stock, along with many of its peers, has seen some epic declines this year. Since the beginning of 2019, Canopy Growth’s shares have fallen by 36% as of the end of last week. However, that doesn’t tell the whole story, as the whole cannabis sector has been struggling since recreational marijuana was legalized in Canada on October 17, 2018. Back then, shares of Canopy Growth were trading at around $66. A $10,000 investment would have been enough to buy you approximately 152 shares of the popular pot stock. Today, however, those shares would be worth about $3,800. 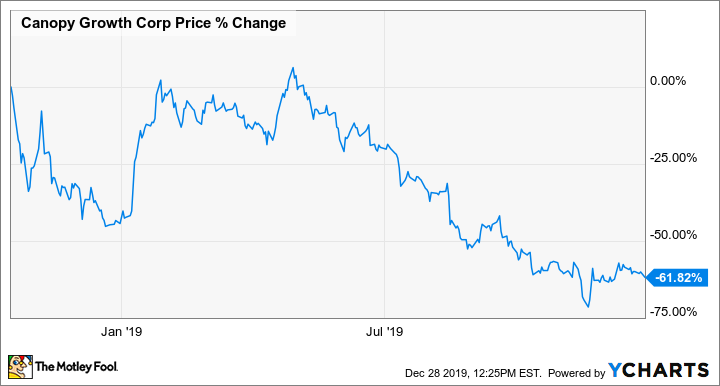 Why has Canopy Growth fallen 62% since legalization?

There have been plenty of reasons that investors can point to as to why Canopy Growth and other cannabis stocks have struggled so mightily since October 2018. The most obvious reason is that Canopy Growth wasn’t worth its ridiculous valuation in the first place. Even in January, the stock was back up to around a $20 billion valuation, putting alongside top blue-chip stocks on the TSX that were not only more established but turning profits as well. A lack of profitability remains a problem today, and although Canopy Growth is at a more modest market cap of around $9 billion, the case could be made that it’s still too expensive.

Trading at 25 times its sales, investors continue to pay high premiums to own a piece of the company. By comparison, top growth stock Facebook only trades at nine times its sales, and it’s also profitable. Cannabis investors have long been romanced by the industry’s promises of high growth that they’ve allowed themselves to pay obscene amounts of money for companies like Canopy Growth that still have a lot to prove.

The challenges that Canopy Growth faced ultimately led to the departure of its longtime leader, Bruce Linton, which was another reason that investors sold their shares in the company. Long seen as the company’s visionary, Linton was also able to generate a lot of excitement in the company and helped build it up to the industry giant that it is today.

Another reason the industry has struggled is a result of the CannTrust scandal, which led to concerns among many investors in the industry, prompting them to sell their shares in cannabis stocks as quickly as possible.

Can Canopy Growth bounce back?

Canopy Growth has a long way to go in winning back investors that it has lost along the way. And while there’s certainly the potential for the stock to recover from this significant sell-off, I wouldn’t expect the stock to get back to the egregious valuation that it was at before.

Cannabis investors have been more cognizant of valuations in the industry, especially with the recreational marijuana market not performing as well as many had hoped in year one. It’s been a sobering reality for the industry, and although 2020 could be a stronger year for marijuana, that may not be enough for Canopy Growth to get back to where it was in its heyday. I wouldn’t be surprised if the stock were to get back to $40 this coming year, but anything beyond that looks like a long shot.