Some Canadian stocks will do better on the Toronto Stock Exchange than others, as tensions escalate between Iran and Canada’s ally, the United States, under President Donald Trump. The oil industry will be the number one winner in Canada followed closely behind by large engineering firms with connections in the energy sector. SNC-Lavalin Group (TSX:SNC) and Enbridge (TSX:ENB)(NYSE:ENB) will at least have one good year ahead of them up until the 2020 U.S. presidential election in November.

SNC-Lavalin boasts unflappable connections to Exxon Mobile and Saudi Aramco, which means that this stock should gain from the geopolitical conflict in oil, as investors will feel more confident in the political forces supporting the corporation. Moreover, the tap on the wrist SNC-Lavalin received after pleading guilty to 30 years of bribery and fraud in December 2019 will no doubt double its share price in 2020.

SNC-Lavalin lost over 60% of its value since June 2018 when the Canadian government placed criminal charges on the company and former executives. Now that the case has ended favourably for SNC-Lavalin, shareholders can expect the stock price to rebound this year.

Enbridge has had issues with unfavourable international supply and trade agreements to Canada’s energy sector. As a higher-cost producer, Canada gains when OPEC and other oil-producing nations reach agreements to restrict the supply of oil to raise prices and improve profit margins. Enbridge has not yet recovered fully since Iran flooded the market with oil in 2015, lowering the price of oil globally.

Up until 2001, SNC-Lavalin’s stock price more or less followed the performance of the S&P/TSX Composite Index. Since then, the stock price has been performing exponentially better than the Canadian stock market index. Even with the legal trouble that SNC-Lavalin has had the past year and a half, the stock has still outperformed the index by 759% over an approximate 25-year time frame!

SNC-Lavalin’s stock price has risen drastically by over 1,000%, while the index percentage price change is only around 311% for the same period.

The share price on Enbridge stock follows this same pattern, although the price appreciation in Enbridge stock is more muted and less steep until 2010. Overall, Enbridge outperformed the TSX Composite by 1,019% at a 1,330% gain over the past 25 years! 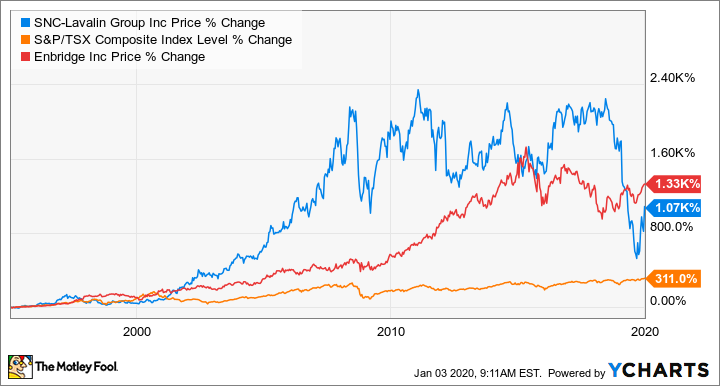 The last five years have been rough on oil companies like Enbridge. Up until 2015, Enbridge matched the stock market performance of the S&P/TSX Composite Index until 2015, when the stock price on Enbridge suddenly fell. Enbridge stock is now nearly 15% lower than it was five years ago, while the TSX index climbed by 16%.

SNC-Lavalin stock would have continued to lead the TSX on price gains if that lawsuit hadn’t caused so many issues for the engineering firm. At the start of 2018, the stock had been up 30% since January 2015. Since then, SNC-Lavalin not only lost those gains, but its stock price fell 30% lower than where it began in 2015. That’s a 60% drop in value overall.

Global politics are setting SNC & ENB up for a rebound

It is no surprise that politics influences the stock market. Canadian investors just need to know how politics will affect their stock market investments to prepare their retirement portfolios for anything that happens. Current retirees especially should understand how the current geopolitical environment will impact their retirement income.

Understanding where to put your money and when is key to becoming a successful stock market investor. It isn’t difficult; it just takes common sense. SNC-Lavalin is a great buy for 2020 as long as your politics and ethics don’t conflict with the company’s business practices. Enbridge might be more of a gamble, but politics do seem beneficial to the oil industry, at least until the end of 2020 when the U.S. elects a new president for a four-year term.

Fool contributor Debra Ray has no position in any of the stocks mentioned. The Motley Fool owns shares of and recommends Enbridge.