The Canada Revenue Agency has facilitated the creation of many Tax-Free Savings Account (TFSA) millionaires with this tax-free savings vehicle. If you haven’t begun investing in high-yield dividend stocks with strong capital gain potential, you should begin building wealth to supplement your Canada Pension Plan payments during retirement.

Why would Power Corporation merge with its subsidiary?

Power Financial and Power Corporation of Canada are both publicly traded stocks with the same tax implications. It makes little sense to manage both listings when the separate nature of the two assets don’t add value to investors.

The idea is that the prices of the two stocks are highly correlated to one another, similar to Brookfield Asset Management (TSX:BAM.A)(NYSE:BAM) and its subsidiaries like Brookfield Infrastructure Partners. The difference is that Brookfield’s subsidiaries are limited partnerships, which means they expand the options of asset ownership for shareholders.

If Power Financial were set up as a publicly-traded limited partnership like Brookfield Infrastructure Partners, company management could argue that the differences between the ownership structures enhance shareholder’s ability to customize ownership according to their specific tax situations. 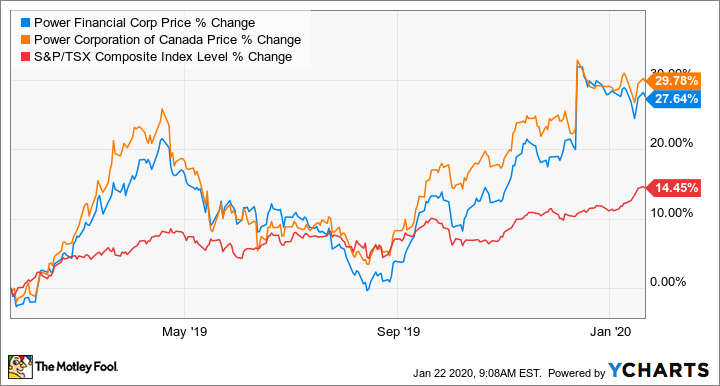 How has Power Corporation performed in the past?

Power Corporation of Canada and Power Financial Corporation have both underperformed relative to the S&P/TSX Composite Index over a 10-year period.

That doesn’t necessarily mean anything, however. There were likely many undervalued stocks at the beginning of 2010 that were overdue for a boost after the global financial crisis.

Moreover, Power Corporation of Canada and Power Financial Corporation could have been slower to bounce back after the financial crisis. Between 2008 and 2009, the prices on these two stocks fell dramatically. Before the year 2010, these stocks regained about 40% of those losses. After 2010, these price gains slowed down.

Overall, the past 25 years have been very good for Power Corporation of Canada and Power Financial Corporation. Both of these stocks have outperformed the S&P/TSX Composite Index over a 25-year horizon.

Power Corporation has been one of Canada’s most prominent firms since it was founded in 1925, nearly 100 years ago. With a solid reputation, you can trust that your money is safe in this perennial institution.

Political connections are good for stock prices in Canada, and Power Corporation boasts a robust professional network across all of Canada’s political parties.

Even better: Power Corporation of Canada last issued a quarterly dividend of $0.405 per share. At the current price of $33.85 per share at writing, the annual dividend yield is approximately 4.8%.

Canadians can put this dependable dividend payer into their TFSA and earn top-notch, tax-free capital gains over the next 12-months on top of this decent dividend.

Fool contributor Debra Ray has no position in any of the stocks mentioned.