It’s never a bad time to buy Toronto-Dominion Bank (TSX:TD)(NYSE:TD), but when the stock has underperformed as badly as it has over the past couple of years, it may be too good of an opportunity to pass up. And with the top bank stock reporting its earnings later this month, there could be extra incentive to buy shares of TD sooner rather than later. Here’s why.

The economy is not showing any signs of slowing down

A report earlier from Statistics Canada indicated that 34,500 jobs were added during January as unemployment continues to fall. Economists were only expecting an increase of 15,000 jobs. Compared to January 2019, the economy added 268,000 jobs, for an increase of 1.4%.

While there are concerns that the coronavirus may weigh on the global economy and potentially impact Canada, for now, the Canadian economy remains strong — a great sign for the banking industry.

Not only does it mean that business activity levels will remain strong, but it also means the risk of default is relatively low as well.

That’s good news heading into earnings, as it could mean the bank has another good quarter. The company is coming off a disappointing fourth quarter where it fell short of expectations, incurring restructuring charges worth $114 million.

If the bank is able to avoid similar expenses when it reports its first-quarter results later this month, it could make for a much more positive result.

The bank stock is known for its terrific dividend and its regular, annual increases. Typically, it’s been the second payment of the year, the one that falls around April 30 where shareholders normally see a spike, and that’s the one that’s coming up.

If that happens, TD’s stock will be yielding around 4.3% if the stock remains around $75.  That’s a very good yield for a top bank stock that’s about as safe a buy as you can find on the TSX.

TD is currently trading at around 12 times its earnings, which is low given its history. Normally, TD shares are trading at a price-to-earnings ratio of 13. Although that’s about a little more than 7% up from where it is today, putting TD’s shares at over $80. 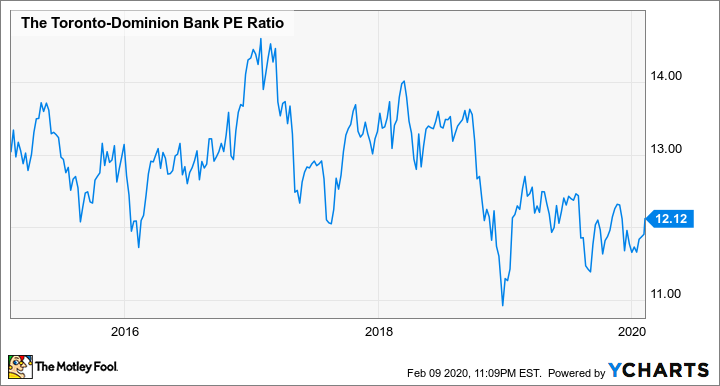 TD is coming off a lacklustre 2019 that saw its stock rose by just 7.3%. If the economy continues to perform well, it may only be a matter of time before the stock climbs back up to over $80 and perhaps even higher than that.

Whether you’re looking to hold for several months or several years, TD is still a great choice and a stock that can be a great fit for any portfolio. Given its low price, investors have the opportunity to benefit from both capital appreciation and dividend income.