Shares of airline giant Air Canada (TSX:AC) have been volatile in 2020 and for good reason. The COVID-19 pandemic has brought international and domestic travel to a standstill. Several analysts fear it might take years for international travel capacity to reach 2019 levels. 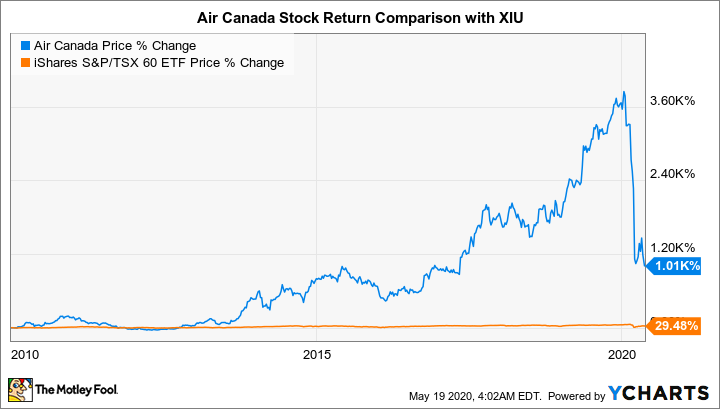 Air Canada will be volatile in the near-term

Prior to the first quarter of 2020, Air Canada reported operating revenue growth for 27 consecutive quarters. In the March quarter, Air Canada sales fell 16% to $3.72 billion. EBITDA fell to $71 million, a decline of 88% year over year compared to $583 million in the prior-year period.

These declines will get progressively worse for the second quarter, as air traffic is expected to fall between 85% and 90% year over year.

Air Canada CEO Calin Rovinescu stated, “Our first quarter results reflect the severity and abruptness of the impact that the COVID-19 pandemic has had on Air Canada, which started to be felt across the global airline industry in late January with the suspension by many carriers, including Air Canada, of services to China.”

He added, “The impact was exacerbated during the month of March with mandated social distancing, unprecedented government-imposed travel restrictions in Canada and around the world and the shutting down of economies.”

What next for investors?

In the third quarter, Air Canada estimates its capacity to fall by 75%, which will result in significant revenue and profitability declines. Airlines is a capital-intensive business and several companies are burning through cash in order to stay afloat. Air Canada is burning about $22 million per day.

In order to cut costs, AC’s management announced plans to reduce its workforce by 60%, according to CBC News. The company’s cost reduction as well as its capital deferral program will result in savings of $1.05 billion in 2020.

Earlier this month, investment mogul Warren Buffett dumped airline stocks and exit this sector. Shares of several airline stocks have been trading lower since the news went public. Rovinescu also claimed that the ongoing crisis is the darkest period in aviation history.

Global governments might be successful in containing the virus. But economies and businesses have suffered billions of dollars in losses due to lockdowns and lower consumer spending. Several countries will plunge into a recession, which means it will take the travel sector a long time to recover.

Analysts have a 12-month target price of $31 for AC stock, which is 112% higher than the current trading price. Investing in Air Canada stock might seem attractive, but it comes with certain risks.

Fool contributor Aditya Raghunath has no position in any of the stocks mentioned.