Shares of marijuana giant Aurora Cannabis (TSX:ACB)(NYSE:ACB) gained momentum in the last three trading sessions. Aurora stock rose by a staggering 67% on May 15 after it rose by 11% a day earlier. Aurora stock price gained over 20% in pre-market trading on the New York Stock Exchange yesterday, bringing total returns of the stock to a staggering 135% in the last three trading days.

Investors were buoyed after the pot stock announced its fiscal third quarter of 2020 results. Aurora Cannabis reported net revenue of $75.5 million in Q3, up from $56.03 million in Q2.

Its cannabis net revenue was $69.64 million, up from $52.7 million in the same period. This strong performance was driven by a 24% increase in recreational cannabis and a 13.5% rise in medical cannabis.

Aurora Cannabis also managed to improve its cash position to $230.2 million. It used $154.6 million in cash in the March quarter, a sequential decline of 43%. Aurora Cannabis sold 12,729 kilograms of marijuana in Q3, up from 9,501 kilograms in Q2.

Aurora stock price was sent higher after the company’s management stated that it would report a positive EBITDA in the first quarter of fiscal 2021. It intends to reduce losses by focusing on cost initiatives, improving gross margins, and lower selling, general and administrative expenses.

ACB’s leadership team maintained that it’s difficult to predict near-term revenue due to COVID-19 related issues. However, its huge market presence and focus on cost efficiencies will help improve EBITDA in the upcoming quarters.

Aurora Cannabis’ robust Q3 performance resulted in stock upgrades. Investment bank Piper Sandler upgraded ACB stock from underweight to neutral with a price target from US$10. This investment bank is optimistic about the company’s expanding margin and resumption of sales in Europe. 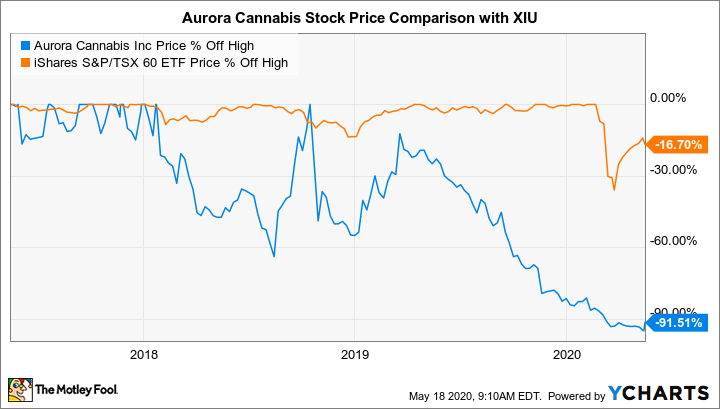 MKM Partners maintained a neutral rating. However, it increased Aurora’s stock price target from $1 to $12. Aurora stock is listed on the TSX and closed trading at a price of $15.35 last week. Despite, the recent optimism, Aurora Cannabis isn’t out of the woods yet. We can see the volatility in the above Aurora stock chart, which could continue in the short term.

The cannabis heavyweight acquired several companies over the last few years. Due to the ongoing bullish sentiment in the cannabis space prevalent at that time, Aurora paid a premium to acquire these companies. This premium is known as goodwill and is the difference between the book value and the company’s acquisition price.

In the December quarter, Aurora Cannabis reported a goodwill impairment write-down of $762.2 million. This impairment charge could rise to a billion in the next few quarters as Aurora’s goodwill stands at $2.41 billion, accounting for 51.2% of total assets.

Aurora Cannabis is also grappling with structural issues like a thriving black market and slow rollout of retail stores in Canada. This has driven inventory levels higher to $251.2 million in Q3, up from $113.6 million at the end of fiscal 2019.

Fool contributor Aditya Raghunath has no position in any of the stocks mentioned.

And lock in one of the lowest prices we’ve EVER offered for our stock-picking service that's beating the market by 3x!

Hurry, this Super Sale will end at midnight…