BlackBerry Ltd (TSX:BB)(NYSE:BB) is coming off a tough start to the new fiscal year. The company released its first-quarter results of June 24. Its revenue totaled US$206 million which was down 17% year over year and the lowest that it’s been in the past two years. BlackBerry also finished with a net loss of US$636 million  — also the largest that it’s incurred in the past two years, primarily due to a goodwill impairment charge.

But as a BlackBerry investor, I’m not terribly worried, and here’s why:

The company’s results could’ve been worse

It’s definitely not the result investors wanted to see but it’s also not unexpected given the impact of COVID-19 and companies not operating, scaling back, or just cutting back on expenses wherever they can. Another important thing to note is that the results went up until May 31. Many companies up until now have been reporting results that were until the end of March when the pandemic was still in its early stages.

BlackBerry’s results, as bad as they were, included two of the worst months of the year — April and May — when many cities in North America were in the midst of lockdowns and when businesses were heavily restricted in how they could operate.

Even June’s been a better month as there’s been more economic activity with cities opening back up and trying to get back to some degree of normalcy. As long as things don’t regress and COVID-19 doesn’t lead to more shutdowns, then that may have been BlackBerry’s worst quarter this fiscal year. And as more companies to go report their earnings in July and August, investors will quickly see just how bad things have been during the pandemic, potentially making BlackBerry’s results look better by comparison.

Despite a big disappointment on revenue and falling short of analyst expectations, BlackBerry’s stock didn’t go on a significant selloff. And part of the reason is likely to do with the stock’s valuation. Given its revenue, shares of BlackBerry haven’t been this cheap in years (outside of March’s market crash): 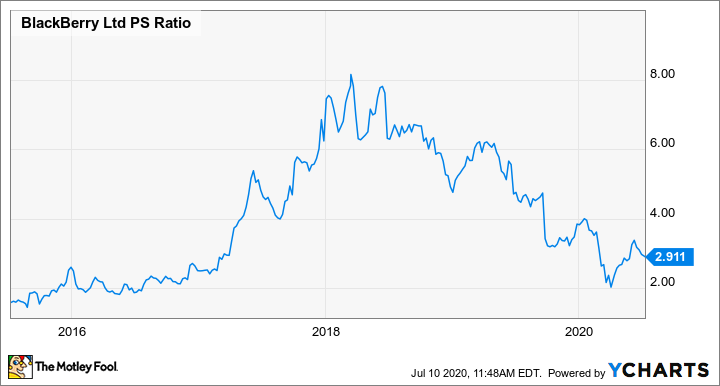 Investors aren’t paying much of a premium for the stock and given its capabilities and the importance of trust and data security in today’s world, I fully expect that a company will be tempted to acquire BlackBerry at some point within the next year. And unless the company has a much more disappointing result next quarter, it’s unlikely that shares of BlackBerry will fall much farther down than where they are today.

Investors shouldn’t be too disappointed with BlackBerry’s recent results as Q1 may go down as one of the worst quarters the company has in years. Ultimately, its business is still sound and there’s a need for cybersecurity. And as long as that’s the case, there’s little doubt that BlackBerry will continue growing over the years, whether it’s on its own or as a part of a larger company.

I wouldn’t be surprised to see BlackBerry’s share price to double from where it is today but investors will need to be patient if they want to see those types of returns.