Home » Investing » Is CERB Coming to an End? 1 Big Change That Could Impact the Future of the CRA’s $2,000/Month Payments

The Canada Emergency Response Benefit (CERB) was extended last month by the government for another two months. Eligible recipients can receive up to $12,000 in CERB payments, which covers 24 weeks. However, there’s another big change that was recently announced and that could be a sign that the CERB may be coming to an end.

On July 13, Prime Minister Justin Trudeau announced an extension to the Canada Emergency Wage Subsidy (CEWS) that will see the program continue until at least December. It was previously extended back in May to go until August 29. The program provides eligible businesses with funding for up to 75% of their employee wages.

Why does this matter?

What’s notable about the CEWS extension is that it goes far beyond the CERB extension — which goes until October 3. Both the CERB and CEWS extensions come, as there’s growing pressure from the Conservatives and from businesses to make changes to CERB.

There are concerns there’s no incentive for people to go back to work while they’re collecting CERB. It’s inevitable that a change is coming, and by extending the CEWS longer than the CERB, it’s clear the government isn’t ready to make the same commitment to CERB. The two-month extension could be a way for the government to buy time to figure out what to do next.

Finance Minister Bill Morneau recently said that “we need to reduce disincentives to growth” and that “we need to make sure the subsidy is appropriate for the challenges facing enterprises in actually rehiring and getting people back to work.”

As companies learn more about CEWS and make use of it, that could help get people back to work and decrease the number of CERB recipients. The hope is that people transition away from CERB and that at least if employers are benefitting from CEWS, that means people are working.

Conservative leader Andrew Scheer has proposed a different incentive to get people working, called the “Back-to-Work Bonus,” which would allow people who make between $1,000 and $5,000 a month to receive $0.50 for every dollar that they earn that’s above $1,000.

If you’re collecting CERB, you should be preparing for the inevitability that it’ll end soon. One way to keep the money coming in without relying on CERB is by investing.

Make the most of your TFSA

A Tax-Free Savings Account (TFSA) is a way for Canadians to earn money without having to pay taxes. For instance, if you were to invest $10,000 and buy shares of Toronto-Dominion Bank (TSX:TD)(NYSE:TD), you could earn roughly $500 in dividend income every year. TD currently pays shareholders a quarterly dividend of $0.79, which yields over 5% annually. And not only that but TD’s increased its dividend payments by 32% in just three years.

In 2017, it was paying investors $0.60 every quarter. The bank’s raised its dividend payments over the past three years by an average of 9.6%. If TD were to continue increasing at that pace for the foreseeable future, it would take about eight years for its dividend payments to double. Then that annual dividend payment of $500 would become $1,000, and you’d be earning 10% in dividends on your original investment rather than 5%.

Dividend increases are by no means a guarantee, but this is an example of how long-term investors can benefit from investing in stocks that routinely hike their dividend payments.

And it’s not just dividends, you can also make money from the stock rising in value. Here’s how TD’s stock has performed against the TSX over the past five years: 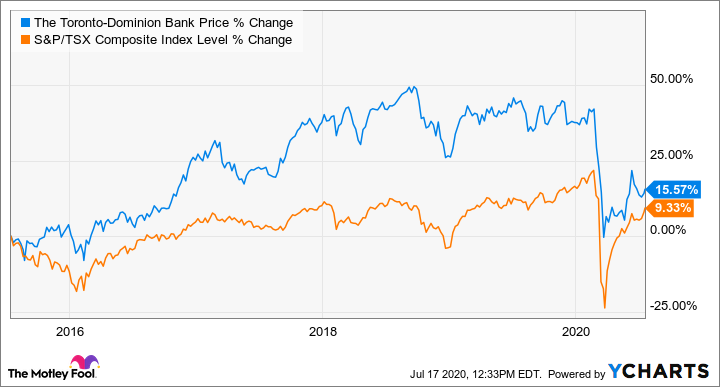 It’s typically outperformed the index, and if not for the disaster year that 2020 has been turning out to be, the stock would likely be well up over 30% over the past five years. There are many safe ways to generate money from investing, and buying shares of TD is just one example. If you’ve got savings, now could be a great time to invest in some cheap blue-chip stocks like TD and put your TFSA to some good use.