You don’t need tens of thousands of dollars to invest to earn some great returns from your investments. Some stocks are at depressed prices right now, and even a modest $3,000 investment could grow to a significant sum of money years from now. Below, I’ll show you two stocks that are dirt-cheap buys right now that could not just double or triple your investment, but that could grow even higher years from now.

Cenovus Energy (TSX:CVE)(NYSE:CVE) is trading at close to $7 per share, and that’s actually an improvement from where it was earlier this year. In 2020, shares of Cenovus are down about 50%, as low oil prices and a poor travel outlook and hence, demand for oil, has spooked investors. However, for contrarian investors who are willing to take on some risk, there’s potential here to earn some significant returns over the long run.

The company’s financials took a hit in the second quarter; Cenovus’s revenue of $2.2 billion declined 61% from the prior-year period. It also reported a loss of $235 million compared to a profit of $1.8 billion a year ago. Lower commodity prices weighed on the company’s results, but there’s reason for optimism: as cities are reopening, demand for oil may soon rise and push prices up.

That, in turn, could help lift not just Cenovus’s financials but bullishness surrounding the stock. The price of West Texas Intermediate has closely tracked the oil and gas stock over the past year: 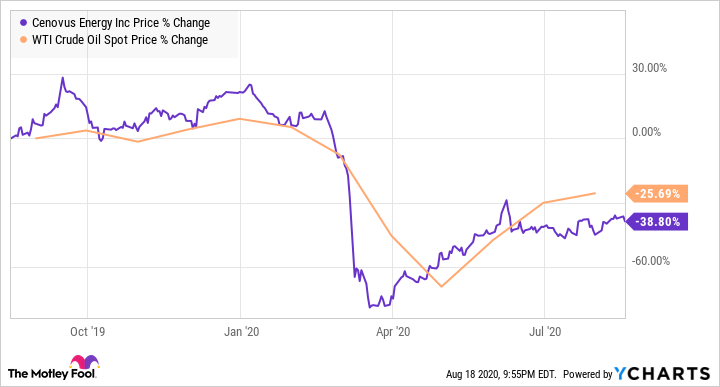 In 2014, shares of Cenovus reached highs of more than $34. If the stock were to rise back to those levels, that would be a return of about 415%. If your $3,000 investment were to rise at that pace, it would be worth close to $15,500. A lot would have to go right for that to happen, but with more potential travel in the future and consumers needing cheap energy options, oil prices could get a much-needed boost in the near future.

Air Canada (TSX:AC) is a related stock that’s likely to do well if Cenovus does. After all, if there’s a surge in people travelling years from now, that means Air Canada is busy. Over the past three years, shares of Air Canada and Cenovus have followed similar paths:

And so if you’re bullish on Cenovus or Air Canada, chances are there’s reason to be optimistic about the other stock as well. Before news of the pandemic broke, shares of Air Canada were trading at more than $50. Even if the stock returned to those levels, that would be a return of more than 210%. That would turn a $3,000 investment into one that’s worth close to $9,400. However, there’s potential for the stock to soar even higher than that.

My hypothesis is that once concerns around COVID-19 start to subside and people are okay with the risk of air travel, demand will soar through the roof. People who put off vacations, honeymoons, and whatever other travel they would’ve wanted to take during the pandemic but didn’t will be eager to make up for lost time. That could propel Air Canada’s stock to even greater heights than it reached in 2020. That’s why an investment in Air Canada stock could easily double in value if you’re patient enough.