Tesla‘s stock has been red hot in 2020, rising by close to 700% as the tumultuous year approaches a close. But as good of a buy as it’s been over the past 12 months, two stocks that trade on the TSX have done even better. Investors may be surprised to learn that it’s not tech giant Shopify (up 200%) or even Facedrive, which has soared 650%, that are among the TSX’s hottest buys this year.

Instead, it’s been two blockchain stocks, HIVE Blockchain (TSXV:HIVE) and Galaxy Digital Holdings (TSX:GLXY) that are making investors incredibly rich in 2020. Entering this week, HIVE is up over 2,100% while Galaxy’s stock has produced returns north of 775%: 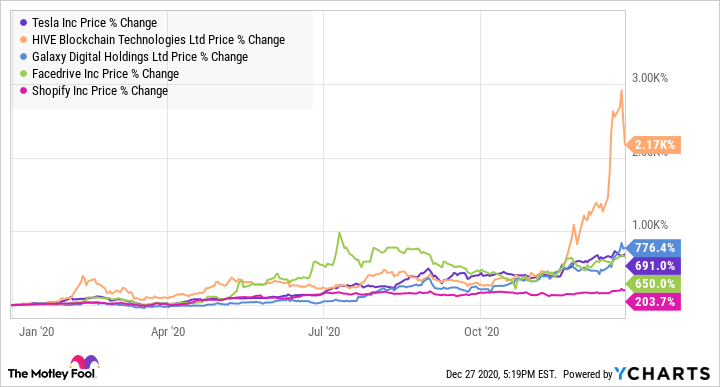 Given the surge of bitcoin this year and the cryptocurrency rising to highs of more than US$28,000, it’s not too much of a surprise that blockchain stocks are doing so well. At the start of 2020, the digital currency was trading at a value of around US$7,000 and it’s been taking off in the past few months, blowing past the highs it reached back in 2017 when it topped US$20,000.

Why HIVE is doing so well

HIVE’s income from digital currency mining through the six-month period ending Sept. 30 of US$19.6 million is actually less than the US$21.1 million it generated during the same period last year. However, its net income of US$11 million is a big improvement from the US$6 million loss it incurred a year ago.

A big part of the reason is the rising crypto prices and a more favourable impact from foreign exchange. And with digital currencies continuing to rise in value, HIVE’s future quarters could look even better as it nets an even stronger profit.

The danger, of course, is that if there’s another correction in the markets similar to what happened in 2018, Hive’s stock price could see a sharp reversal. It’s unmistakable the impact that the price of bitcoin has had on HIVE in recent years: 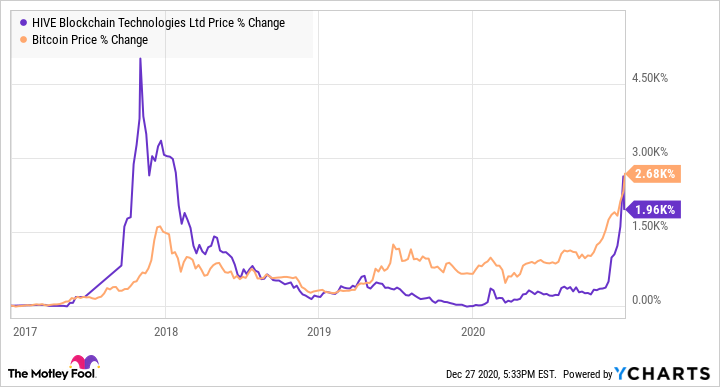 If you’re bullish on bitcoin, HIVE would be a great way to tap into that excitement. But this isn’t an investment that would be suitable for risk-averse investors.

Galaxy Digital may not be much more stable

Unfortunately, for investors, Galaxy Digital isn’t a less volatile investment than HIVE and also possesses many risks as its share price will also be tied to the popularity of blockchain. The company invests in a variety of businesses and on its website states that “our mission is to stand behind companies that we believe will be successful in helping to accelerate and promote the institutional adoption of blockchain technology and digital assets.”

Like HIVE, Galaxy’s stock has also moved along with the cryptocurrency this past year: 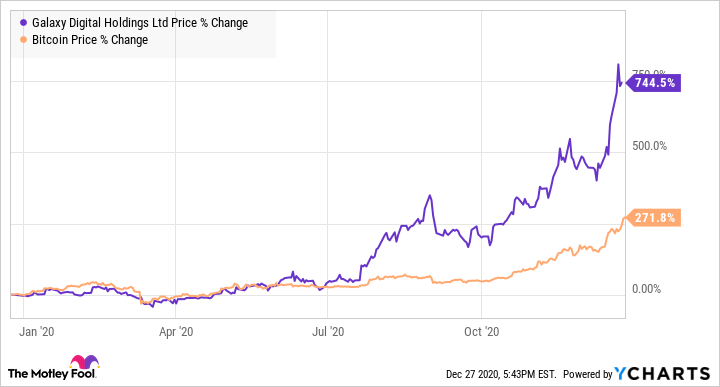 In the three-month period ending September 30, Galaxy reported an income of US$9.5 million compared to a loss of U$14.9 million in the same period last year. As much will depend on the company’s underlying investments, investors can be taken on some wild rides with this investment.

While both Galaxy and HIVE provide crypto investors with the opportunity to cash in on the rising bullishness surrounding bitcoin and other digital currencies, they should be very careful with these investments. As with Tesla, there’s been lots of hype surrounding these two stocks and while they’ve done well in 2020, there’s no guarantee that next year will bring the same types of returns.