Pot stocks have generated stellar returns for investors since Joe Biden won the Presidential race south of the border. Market participants are hopeful regarding marijuana legalization in the U.S. that will allow Canadian cannabis producers to establish a presence in the largest pot market in the world.

In the last three months, shares of cannabis companies including Aphria, Canopy Growth, and Hexo have returned 147%, 24%, and 63% respectively. However, as seen in the below chart, Aurora Cannabis (TSX:ACB)(NYSE:ACB) has underperformed its peers and is up just 3% in this period. 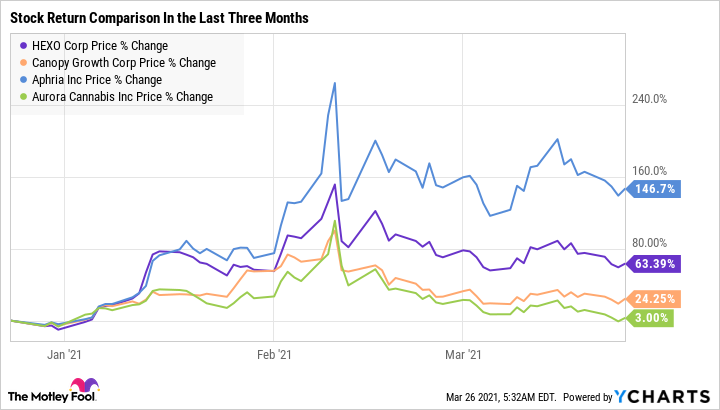 Aurora Cannabis stock has in fact burnt massive investor wealth and is trading 93.5% below its record high. Similar to most Canadian pot producers, Aurora Cannabis is grappling with lower than expected demand, billion-dollar write-downs, overvalued acquisitions, high inventory levels, mounting losses as well as a thriving and low-cost black market.

Let’s see if ACB stock can stage a comeback and recover lost ground in 2021.

In the December quarter, Aurora Cannabis reported net revenue of $67.7 million which was a year-over-year growth of 23% but a marginal decline on a sequential basis. However, ACB reported a comprehensive net loss of $302 million or $1.74 per share. Comparatively, its net loss stood at $106 million in the September quarter and $1.3 billion in the prior-year period.

However, the company’s consumer cannabis net revenue was down 17% on a sequential basis. Further, Aurora Cannabis also failed to deliver on its promise of delivering a positive EBITDA by the end of the fiscal second quarter of 2021.

Due to these concerns, MKM Partners Bill Kirk downgraded ACB stock to “sell” from “neutral” last month. Kirk emphasized, “We don’t see a cost-cutting or growth path that gets to near-term positive EBITDA.”

Kirk also explained the Canadian market is wrestling with an oversupply of cannabis and Aurora’s plan to shift towards higher-margin products would not be easy.

What’s next for ACB stock?

Around mid-2019, the company had 15 cultivation facilities that could produce 650,000 kilograms of marijuana each year. It meant Aurora Cannabis was well poised to benefit from economies of scale and engage in long-term supply deals.

However, the company sold off five grow farms and another greenhouse spanning one million square feet last year due to tepid demand as well as massive losses. In the last two quarters, ACB spent $173 million to fund its operating activities. Though the cash burn was lower than the prior-year figure of $229.6 million, it’s a problem that is impossible to ignore.

While Aurora Cannabis ended 2020 with $565 million in cash, the company has to improve its profit margins and avoid further cash burn.

Over the years, ACB has diluted shareholder wealth significantly and raised equity capital multiple times. Aurora’s outstanding share count rose from 1.35 million in June 2014 to a staggering 184.2 million at the end of December 2020, indicating a rise of 13,500%.

In terms of valuation, ACB stock is trading at a market cap of $2.31 billion, suggesting a forward price to sales multiple of eight, which is steep for a company expected to grow its top line by just 4.6% in fiscal 2021.

Should you invest $1,000 in Aurora Cannabis right now?

Before you consider Aurora Cannabis, you may want to hear this.

Motley Fool Canadian Chief Investment Advisor, Iain Butler, and his Stock Advisor Canada team just revealed what they believe are the 10 best stocks for investors to buy right now... and Aurora Cannabis wasn't one of them.

The Motley Fool recommends HEXO. and HEXO. Fool contributor Aditya Raghunath has no position in any of the stocks mentioned.