In the last year, pot stocks south of the border have crushed broader market returns. Stocks such as Green Thumb Industries (CNSX:GTII), Cresco Labs (CNSX:CL) and Jushi Holdings (OTCMKTS:JUSHF) have returned 370%, 328%, and 498%, respectively, in the last 12 months, as seen in the below chart.

While Canadian marijuana producers are grappling with massive losses and decelerating revenue growth, the above-mentioned companies are on the cusp of profitability. The legalization of cannabis at the federal level in the U.S. is expected to be a massive tailwind for pot producers.

Let’s see why these three stocks might continue to outperform in 2021 as well.

In the fourth quarter of 2020, Green Thumb Industries reported revenue of $177.2 million, indicating year-over-year growth of 134% compared to revenue of $75.8 million in the prior-year period. 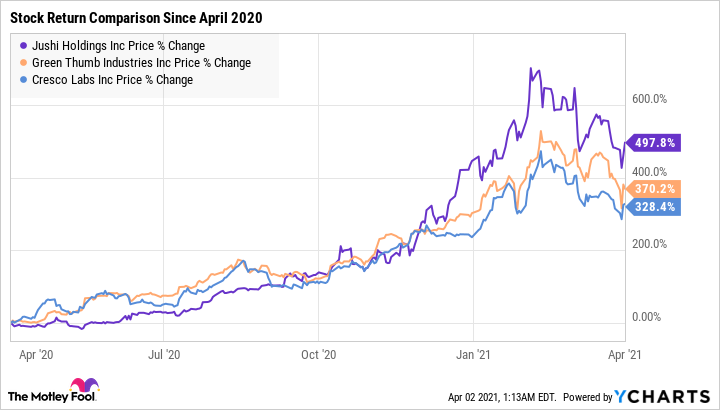 It generated an adjusted EBITDA of $65.4 million, which was up 23% sequentially and 374% higher than the prior-year period. Green Thumb reported a positive operating cash flow in each of the four quarters, as its operating expenses rose by just 14% year over year.

One of the key drivers of top-line growth for GTII was the opening of 11 retail cannabis stores in the last year and it ended Q4 with 51 stores in 10 states.

Cresco Labs disclosed its Q4 results last month and reported revenue of $162.3 million, which was a 300% increase compared to Q4 of 2019. It was the company’s best-performing quarter to date in terms of revenue. However, this stellar growth in sales did not translate into profits, as Cresco’s net loss stood at $24.4 million.

Its adjusted EBITDA rose from just $2.9 million in the prior-year period to $50 million in the December quarter. The cannabis multi-state operator ended the year with a cash balance of $136.3 million.

One of the major drivers of Cresco’s revenue growth was its acquisition of Origin House that was completed in January 2020.

This cannabis and hemp company engages in the cultivation and distribution of medical and adult-use marijuana products. Jushi Holdings is focused on creating a portfolio of cannabis and hemp-derived assets in several states in the U.S.

Last month, Jushi opened its 17th retail cannabis store. It now has 11 stores in Pennsylvania, which is one of the fastest-growing pot markets in the country.

Valens (TSX:VLNS) shares soared 178% in early-morning trading on Nov. 18 after the company commenced a three-to-one stock split. This came after…