The Big Five Canadian banks have been anchors of diversified stock portfolios. After all, they have made consistent dividend payments that increase in most years.

These dividends provide a more attractive income than what the market offers. Particularly, the Canadian stock market yields about 2.8%. In comparison, the Big Five Canadian banks offer an average yield of 4.1%, which is 46% greater. 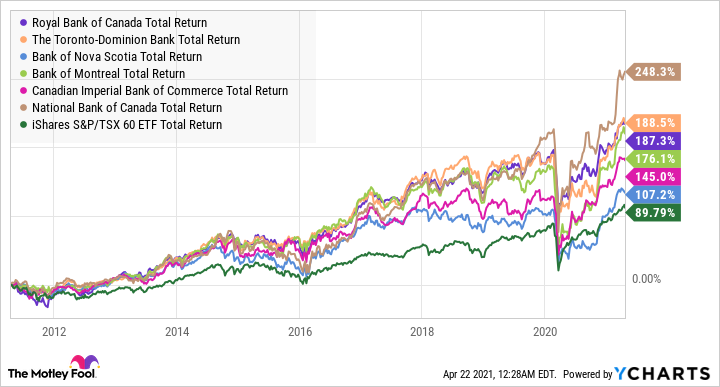 Other than income, the banks beat the market in long-term total returns as well. Leading the pack in the 10-year total returns are Toronto-Dominion Bank and Royal Bank of Canada. However, the sixth-biggest Canadian bank, National Bank of Canada (TSX:NA) leaves both in the dust, beating them both by about 60%.

That is, over the last 10 years, the same investment in TD or RBC stock that produced $10,000 of returns would result in about $16,000 when invested in National Bank stock instead.

National Bank’s total returns precisely demonstrate the power of compounding. Even when a stock outperforms another by only a few percentage points, they add up and make a big difference over time.

Let’s take a closer look at National Bank to see how it fared against the pandemic last year.

National Bank stock during a time of high uncertainty

In fiscal 2020, most of the big Canadian banks saw a meaningful reduction in their earnings. The reduction was due to higher provisions for credit losses (PCL) as the banks set aside more cash in expectation of higher percentages of bad loans (for which most did not materialize).

In other words, National Bank’s PCL on impaired loans was even lower than RBC’s last year! This implies that despite National Bank’s smaller size and goal to grow, it did not trade growth with quality. Instead, it maintained a high-quality loan portfolio.

Currently, at $88.22 per share, at writing, National Bank stock is fairly valued and yields 3.2%. The yield is a bit low compared to its historical levels. 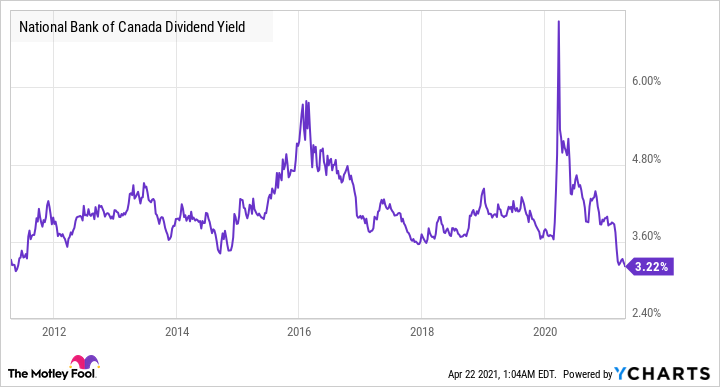 However, its yield can quickly increase in a correction or when it’s allowed to increase its dividend again. Because of the highly uncertain economic environment today, regulators have banned the big Canadian banks from increasing their dividends.

National Bank’s quarterly dividend has maintained the same for six quarters so far, whereas, before the pandemic, it increased its payout every six months or so.

As a result of the bank’s frozen dividend and sturdy earnings, its payout ratio is estimated to be roughly 37% this year. I wouldn’t be surprised if National Bank gave a big boost to its dividend once the ban is lifted.

If you’re underweight in Canadian banks, consider buying a small position here. If not, certainly look into buying National Bank stock next time there’s a correction in the big Canadian bank stocks.