A study performed by Morningstar by observing publicly traded U.S. stocks over the past decade suggests that most stocks fail. The results were as follows: about 42% of individual stocks finished in the green, 36% were in the negative, and 22% disappeared (possibly about half were acquired with decent results and the other half met grave ends and were delisted).

The article pointed out that “even during a decade marked by an almost uninterrupted bull market, the average stock wasn’t much good.”

However, there were stocks that investors could have bought to greatly improve their chance of success.

“Larger companies were significantly more reliable than their smaller rivals. The major firms were not only likelier to survive, but also likelier to profit when they did persist.”

This isn’t surprising when we think about it. Large-cap stocks have grown to that size from being smaller-cap stocks. To do that over a decade, the underlying companies must have become more profitable over time.

Here are the results of the study of U.S. stocks traded in the past 10 years. “Whereas 42% of the overall stock universe persisted for the full decade and posted a positive total return, 77% of the biggest 1,000 companies did so. Conversely, once the larger fish had been removed from the list, the success ratio of the next 4,000 stocks dropped to just 33%. Even though the decade contained a prolonged bull market, most smaller stocks recorded a loss, not a gain.”

Specifically, large-cap stocks are publicly traded stocks with market caps of $10 billion or greater. They tend to be less volatile and are the targets of investors’ flight to quality after a market crash.

You really don’t need to be creative in this process. Think of the popular brands that are leaders in their industries — Royal Bank of Canada, Magna International, Amazon, Microsoft, and Alphabet, for example. Respectively, their 10-year annualized returns are about 10%, 18%, 33%, 27%, and 24%.

I would throw Facebook into the mix but it hasn’t been listed for 10 years yet. For the roughly nine years it has been publicly trading, it has delivered total returns of close to 30% per year.

The study also revisited the fact that a small percentage of stocks contributed to most of the gains in the stock market. This suggests that winning stocks tend to continue winning.

Here’s a chart showing the long-term price chart of a group of winning stocks. These stocks tend to have a long-term upward trend, though there are inevitable corrections in between.

In particular, investors interested in cyclical stocks like Magna should aim to buy at a cyclical low to spice up their long-term returns. 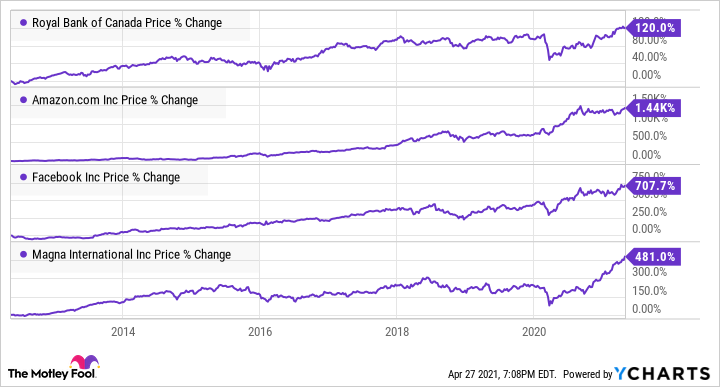 There’s also survivorship bias here as one could argue that these stocks were cherry picked.

Pay less for what a stock is worth

No matter if you seek to buy large-cap stocks or winners that could be small-cap stocks, it always helps improve your portfolio performance to pay less for what a stock is worth.

For example, Royal Bank stock fell close to 30% during the pandemic market crash last year, while its earnings per share only ended up falling 12%, a fraction of that. Of course, the resilient earnings could only be confirmed in hindsight.

However, investors can still aim to be rational and argue that any earnings drop in the leading bank would only be temporary. Instead, it would be the right thing to do to think about an investment in the leading bank based on its normalized earnings power, which would suggest that the stock was a bargain last year during the crash.

When you buy stocks that appear to be winners, especially small-cap stocks, make sure that their balance sheets are in good standing and that they’re not heavily indebted.