Home » Investing » This Undervalued Canadian Energy Stock Has 80% Upside Potential: Should You Buy It?

Canadian oil producer Crescent Point Energy (TSX:CPG)(NYSE:CPG) was one of the top TSX stocks to watch this week. Its second quarter (Q2 2021) revenue and earnings were expected to show triple-digit growth rates in Wednesday’s financial results release. They did so. However, should investors buy shares today anticipating Crescent Point stock to rise by 80% to reach analyst price targets over the next 12 months?

Second quarter revenue before derivative-induced losses of $751 million was quite close to analyst revenue estimates for $783.5 million. However, net revenue for the quarter at $632 million was weighed down by a major commodity price hedging loss. The topline result was still a 144% increase compared to a prior year’s quarter.

Most noteworthy was the company’s $2.1 billion in quarterly net income which translated to diluted earnings per share (EPS) of $3.65. Given an analyst estimate for a GAAP EPS of 25 cents, the company beat market expectations by 1,260% this time.

That said, before we celebrate the earnings beat, the company recorded a $2.5 billion reversal in earlier impairment losses which were recognized during the low-oil-price regime of 2020. This performance won’t be repeatable. Actually, the gain may never have happened if the company reported under the U.S. GAAP accounting framework.

Is CPG stock a buy after Wednesday’s earnings?

Analysts are bullish on Crescent Points energy stock right now, and there are many good reasons for that.

Cash flows are growing, and the company anticipates generating excess cash flow of $675-775 million this year at oil prices of US$65 to US$75 per barrel for the remainder of the year. The applicable Western Texas Intermediate (WTI) oil benchmark was printing US$72.13 at the time of writing.

Most noteworthy, the company revised its 2021 annual production upwards from a prior lower range of 128,000 to 132,000 barrels of oil equivalent per day (boe/d) to 130,000 to 134,000 boe/d. Higher productivity during a commodity price boom will continue to boost the company’s cash flows and help it substantially reduce its high debt levels.

Speaking of corporate debt, CPG reported a net debt level of $2.3 billion at quarter-end. It reduced the debt by $360 million after closing its books for Q2 2021. A strong cash flow generation outlook during the remainder of this year should help the company in repairing its balance sheet.

The above picture paints an ever-improving outlook for CPG stock over the near term. The upside potential is real. Analysts have been upgrading their price targets accordingly. 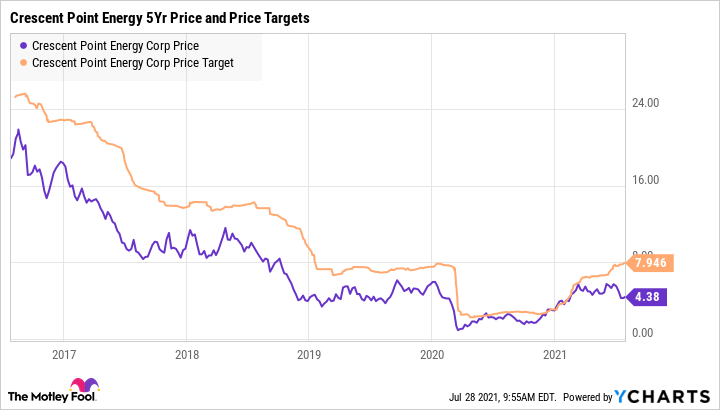 There was a consensus analyst price target on Crescent Point Energy stock of $7.69 going into Wednesday’s earnings. This indicated to investors in the energy firm a potential 79.6% upside over the next 12 months.

That said, the downside to owning CPG stock comes mainly from a historical perspective. Given an enterprise value (EV) to EBITDA multiple of 10 against an industry average of 14, shares remain undervalued for some good reason. A heavy debt load and the company’s history of ill-timed acquisitions weigh heavily on investor enthusiasm.

However, oil has rebounded, and the company could rack in significant boatloads of cash this year if oil remains strong.

The market may find CPG stock irresistible if commodity prices hold strong. More so if the company’s production targets continue being surpassed as has been reported so far this year.