The market seems to have caught wind of something as Telsa (NASDAQ:TSLA) stock dropped close to 6% in Monday’s trading followed by a plunge of about 11% as of writing.

Twitter May Have Caused Tesla’s Stock Price to Drop

Apparently, on November 6, Elon Musk, the co-founder and CEO of Tesla, made a poll on Twitter about whether he should sell 10% of his Tesla shares.

As one of the richest men on earth with over US$300 billion in net worth, it’s not surprising that Musk has approximately 63 million followers on Twitter. His poll attracted more than 3.5 million votes.

Later on Saturday, Musk followed with these tweets: “I will abide by the results of this poll, whichever way it goes” and further explains that “Note, I do not take a cash salary or bonus from anywhere. I only have stock, thus the only way for me to pay taxes personally is to sell stock.”

The U.S. government has been looking for ways to tax the ultra-rich Americans. Indeed, the ultra-rich knows how to avoid taxes. In the case of Elon Musk, he gets a lot of Tesla stock via stock options. When he sits on tonnes of shares and allows them to compound as unrealized capital gains, in the long run, he doesn’t have to pay any taxes.

CNBC believes that no matter which way the poll went, Musk will probably have to sell Tesla stock in the near term because he “faces a tax bill of more than $15 billion in the coming months on stock options.” Additionally, it appears that Musk has taken out loans using his Tesla shares as collateral.

What is Tesla’s Long Term Outlook?

Let’s take a step back to look at the actual stock. Aside from the probable news that Musk is selling a meaningful portion of shares, is Tesla stock worth owning today? Despite the seemingly large declines in the last two trading days, the consumer cyclical stock is still about 141% higher than a year ago.

Tesla’s trailing-12-month revenue growth was 66% to US$46.8 billion, while its gross profit and net income were US$10.8 billion and almost US$3.5 billion, respectively. That’s a gross margin and net margin of 23.1% and 7.4%. The company just started turning a profit last year and that trend seems poised to continue.

At about US$1,041 per share at writing, the electric car maker trades at a forward price-to-earnings ratio of about 173, which is reasonable for its expected growth rate for this year. Although the stock doesn’t appear to be expensive right now, if growth shrinks to much lower levels in comparison to its last year’s stellar results, the stock would continue to tank due to multiples contraction. Slower growth could come from a macro level such as microchip shortages.

Should You Buy Tesla Stock Today?

It would be silly to bet against Tesla, though, as it is one of the best stock performers in the last 10 years — turning an initial US$10,000 investment into US$1.6 million — an unbelievable 162-bagger! Even just holding the stock for five years turned out to be a 26-bagger, which is superbly impressive! 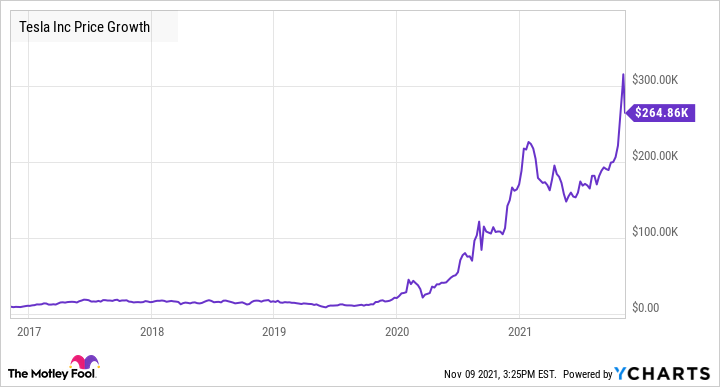 A more meaningful correction could prove to be a good buying opportunity. From a technical perspective, Tesla stock could experience some support at about US$700-900 per share.

1 TSX Stock That Is the Chance of a Lifetime

Is the stock market heading towards a December disaster? There seemed to be no end to the rally when the…

Why There Will Be No Recovery in 2021 for Air Canada (TSX:AC)

When the pandemic began back in 2020, one of the hardest-hit sectors of the economy was airline travel. Despite there…

Are Crypto Stocks the Best Buys in This Dip?

For a few weeks now, markets have been on edge. Despite some stocks reporting strong earnings, others have been struggling…

Vermilion Energy (TSX:VET)(NYSE:VET) shares jumped 9% on Monday after the company announced it would acquire 36.5% interest in Corrib Natural…

Shares of Galaxy Digital Holdings (TSX:GLXY) fell 7% on Monday after Galaxy stock announced it agreed to issue and sell…