Megatrends. If you haven’t already invested in the pipeline industry, this word will help you see what’s happening…and how big the opportunities are.

Today, billions of dollars are flowing to the Canadian energy sector to build up storage tanks and processing plants. Oil and gas drillers are scrambling to lock in long-term contracts with pipeline companies in order to secure export routes.

According to a recent study by ICF International, Canada and the United States will need to spend almost U.S. $30 billion per year on infrastructure for a total of U.S. $640 billion over the next 22 years. That amount of money could buy you Royal Bank, TD Bank, CIBC, Bank of Montreal, Encana, Rogers Communications, Telus, and BCE combined. Plus you’d have about U.S. $100 billion left over in walking around money.

So why is this happening and how can you get a piece of the action? Let me explain…

North America is in the midst of an energy revolution. Thanks to new technologies like horizontal drilling, stream assisted gravity drainage, and hydraulic fracturing, billions of barrels of hydrocarbons are now being pulled out of new energy basins across the continent.

There’s only one problem: This unprecedented surge in oil and gas production has overwhelmed the industry’s processing and transit facilities. And this has created a huge opportunity for midstream companies that are working to fill this infrastructure gap.

The numbers are mind-boggling. Based on the same report from ICF International, the North American energy industry will spend U.S. $12.4 billion annually through 2015 on oil gathering and mainline transit systems, equipment, and storage tanks. Natural gas and natural gas liquids will require U.S. $16.7 billion per year in new investment on new infrastructure such as pipelines, pumping, and NGL export facilities.

As you can see from the chart below, infrastructure spending has been pushing the share prices of Canada’s top pipeline companies higher — easily outperforming the S&P/TSX Composite Index (TSX: ^OSPTX). But they still have more upside potential. 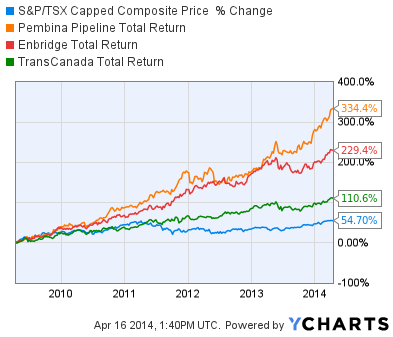 Enbridge (TSX: ENB)(NYSE: ENB) is the best positioned of its peers to exploit this development. The company has over $35 billion in secured expansion projects as management looks to expand takeaway capacity out of the Alberta oil sands and the North Dakota Bakken. This should allow Enbridge to deliver 10% to 12% annual earnings per share growth over the next five years.

Alberta shipper Pembina Pipelines (TSX: PPL) is struggling to keep up with surging supplies. Today, the company carries about 720,000 barrels of light oil and liquids per day through its network. However, management projects this figure to grow to 1.4 million barrels per day by 2017.

We’re still in the early innings of North America’s energy revolution. But in order to accommodate surging oil and gas production, the energy industry will have to spend tens of billions of dollars for decades on new infrastructure. That should provide a tailwind for pipeline companies well into the future.

While these three Canadian stocks trade undervalued and below $20 a share, they are easily some of the top investments…