The Motley Fool Canada » Investing » Will Westport Innovations Inc. Bounce Back in 2016 After Crashing to All-Time Lows?

After wiping out nearly 80% of investors’ value last year, Westport Innovations Inc. (TSX:WPT)(NASDAQ:WPRT) failed to provide any respite in 2015. The stock is down nearly 37% year to date–a figure that doesn’t look as bad until you realize that it’s currently trading at one-tenth of its peak of 2012. 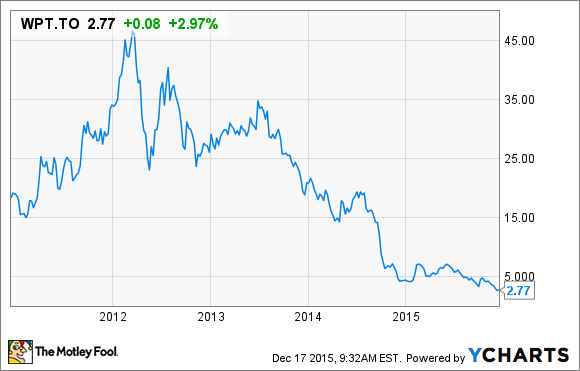 While there are no points for guessing that there’s little downside left in Westport’s stock, the big question is whether or not it’ll bounce back in 2016.

The “Black Monday” that wiped it all out

Westport’s steepest fall came in the latter half of the year, triggered by China’s “Black Monday” crash mid-August. An unexpected devaluation of the yuan, even as China’s manufacturing activity tumbled to lows not seen in six years, triggered a global selloff.

For Westport, a slowdown in China hurts its joint venture with Weichai Power, which contributed more than half of Westport’s total segment revenues last year and was also its most profitable segment.

Weakness in China also hurts sales from Westport’s venture with Cummins, another key source of its revenue. The effect was evident in Westport’s numbers. Revenues from Weichai-Westport slumped 69% during the nine months ended Sept. 30, 2015, with Westport’s earnings from the venture plunging 76% during the period.

But there’s a bigger reason why Westport lost favour with the market this year.

The dramatic decline in oil prices in recent months has made diesel and gasoline cheaper and natural gas less attractive for fleets to consider switching. So Westport’s growth prospects only look dim until the adoption of the alternative fuel takes off.

That’s particularly worrisome given Westport’s fragile financial standing. The company has been burning cash at an alarming rate–something that caught the market’s attention this year. Westport held only US$42.1 million in cash and short-term investments as of Sept. 30, 2015, down a staggering 75% from the comparable period last year. Meanwhile, Westport’s net loss during the nine months through September increased 11%.

Where is Westport headed?

Westport expects its consolidated business to turn adjusted EBITDA (earnings before interest, taxes, amortization, and depreciation) by mid-2016. The company’s adjusted EBITDA losses declined 56% year over year during the third quarter. Of course, EBITDA doesn’t mean much unless it trickles down as profits. But hitting the goal should mean more cash coming in from Westport’s core business, which would be encouraging.

Westport’s balance sheet should also improve as it acquires Fuel System Solutions, which currently generates greater cash from operations than Westport. However, the merger could also push Westport’s turnaround further away as both are loss-making companies. The pre-tax savings target of US$30 million from the merger looks tiny as it won’t be fully realized until 2018.

A challenging year ahead

Westport is headed for a challenging 2016. The turmoil in the oil market and sluggishness in key international markets are the two biggest obstacles to its growth. The stock may continue to swing wildly, but there’s little for investors to look forward to at this point in time.

Fool contributor Neha Chamaria has no position in any stocks mentioned. The Motley Fool owns shares of Cummins.