If you can’t figure out where Potash Corporation of Saskatchewan Inc. (TSX:POT)(NYSE:POT) stock is headed after getting crushed over the past year, billionaire Ray Dalio–founder of one of the largest and best-performing hedge funds, Bridgewater Associates–may have an answer.

The fund’s latest 13-F report for the first quarter reveals a fresh position in 721,300 shares of  Potash Corp. and a smaller number of Agrium Inc. (TSX:AGU)(NYSE:AGU) shares. This update is worth noting for two reasons:

Nevertheless, it’s interesting to see Dalio betting money at a time when fertilizer companies are taking sharp hits on their top and bottom lines and guiding lower for the year. So has Dalio spotted an opportunity that investors may have missed?

Three factors could have encouraged Dalio to bet on Potash Corp. and Agrium.

While Potash Corp. stock has almost halved in the past year, Agrium showed greater resilience and is down only about 14%. That may explain why Dalio bought a smaller stake in Agrium. 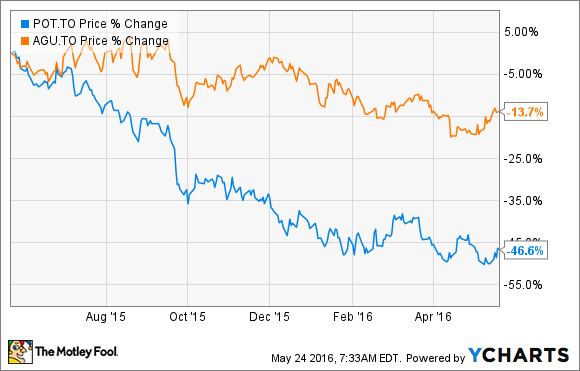 Thanks to the steep fall, Potash Corp. is trading at only 14 times trailing earnings. But Dalio must have bought it even cheaper as the stock was trading for a P/E of about 11 times for a good part of the first quarter. Comparatively, Agrium is now trading at its lowest valuations for the year at about 13 times trailing earnings. Did we just find an opportunity there?

The point to note is that both stocks are trading at substantial discounts to their respective five-year average as well as broader market P/Es, making them great value stocks right now–something that may have caught Dalio’s attention.

Potash Corp. and Agrium also make great buys if you look beyond valuations, as both are fundamentally strong companies. Weak crop prices may have hurt farmers’ income and demand for fertilizers in recent quarters, but fertilizers remain an essential agricultural input that boosts crop productivity.

Talking about near-term prospects, major potash-consuming nations China and India are expected to sign their yearly import contracts in coming weeks, which should support potash prices. Meanwhile, urea (nitrogen) prices appear to be stabilizing after prolonged weakness. Combined, these factors could prevent Potash Corp.’s and Agrium’s sales from falling further.

Dividend stocks appear to have caught Dalio’s attention last quarter. Potash Corp and Agrium are no different, having emerged as favourites among dividend investors thanks to their solid dividend yields of 5.9% and 3.9%, respectively. Granted, Potash Corp.’s recent dividend cut was unprecedented. Yet, being able to pocket a hefty yield during periods of uncertainty remains a good investment strategy.

Should you buy now?

Buy Potash Corp. and Agrium only if can stomach the volatility, because near-term headwinds are far from over. Forward P/Es for both stocks are higher than trailing P/Es, suggesting further potential downside in earnings. With profits and cash flows under tremendous pressure, I’m also wary about the dividends and not ruling out the possibility of another cut from Potash Corp.

Dalio may sell stocks even before you realize it, so caution is the best option here. Better yet, there are more promising stocks to consider.