Two strong earthquakes ripped through Japan this week–one of which even triggered a tsunami warning in Fukushima–have brought back haunting memories of the 2011 Fukushima-Daiichi disaster that turned the nuclear industry upside down overnight. Cameco Corporation (TSX:CCO)(NYSE:CCJ), a pure-nuclear play and among the world’s largest uranium producers, saw its stock crash more than 60% since 2011.

Why Fukushima is so dangerous yet so important for Cameco

The deadly nuclear accident in 2011 was triggered after the tsunami stalled cooling systems of three reactors, leaking toxic radiation into the surrounding areas. Thereafter, Japan shut down all of its 50 nuclear reactors within months. Before the disaster, nuclear power generated almost 30% of the energy consumed in Japan.

As the reactors shut down, demand for uranium–which is used to create nuclear fuel–dove, sending Cameco’s profits tumbling. Between 2010 and now, Cameco’s net income has plunged a staggering 94%. 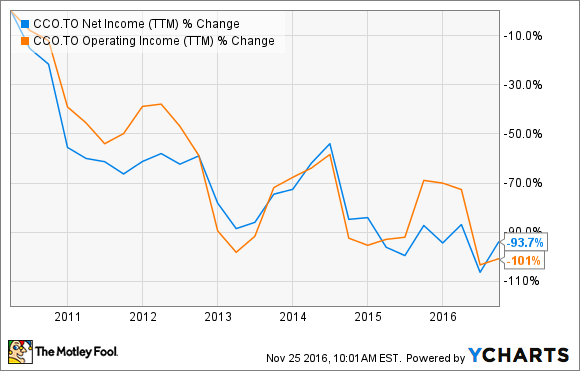 Needless to say, Cameco’s turnaround depends largely on reactor restarts in Japan, which has kicked off, albeit at snail’s pace. Japan’s fifth reactor resumed operations a couple of months ago, and roughly 20 are awaiting approval.

While there have been no reports as of yet, I’m afraid the fresh earthquakes at Fukushima could see the protests against nuclear plants gather steam, compelling the government to adopt a more cautious approach towards reactor restarts. That might makes things tougher for Cameco, especially at a time when troubles are already brewing in some parts of the world.

Several nuclear plants are shutting down

The South African government has delayed plans to build new nuclear plants because of a slowdown in the economy. Mind you, it isn’t a small delay. The government previously expected eight reactors to begin operations from 2023. The timeline has now been pushed by more than a decade to 2037.

Meanwhile, 20 reactors were recently shut down in France due to quality concerns. With the French government’s recent energy bill aiming to reduce nuclear energy production to 50% from 75% by 2025, many more reactors now run the risk of a shut down. And Vietnam scrapped two nuclear plants because of massive cost overruns.

The point I’m trying to drive home is that while the 60 reactors under construction worldwide fueled optimism about Cameco’s turnaround, it’s important to consider potential reactor shut downs that could offset strength in the uranium market. As it is, uranium prices are at multi-year lows, and it’ll require a really strong pick up in demand for prices to recover amid the stockpiles.

Don’t get me wrong; I’m not writing Cameco off, as it still stands to be a big beneficiary as the uranium market recovers. My concern is that the wait might stretch longer in the wake of the Fukushima earthquakes.

Fool contributor Neha Chamaria has no position in any stocks mentioned.