The Motley Fool Canada » Investing » Is Potash Corporation of Saskatchewan Inc. About to Make its Costliest Mistake?

Getting regulatory approvals hasn’t been a smooth ride, and while the merger has received the green signal from Brazil, Russia, and Canada, the three most important nations have yet to give Potash Corporation and Agrium the go-ahead: U.S., China, and India.

The latest development, per Reuters, is that Potash Corporation is hiring Goldman Sachs and BofA Merrill Lynch to sell its 32% stake in Sociedad Quimica y Minera de Chile (NYSE:SQM), a Chile-based lithium and potash company.

The reason? China and India — the largest fertilizer-consuming nations in the world — have reportedly asked Potash Corporation to divest its minority interests to gain approval for its merger with Agrium.

SQM is the largest of Potash Corporation’s four offshore investments, the other three being the Arab Potash Company, Israel Chemicals Limited, and China-based Sinofert.

The sale of SQM, if it materializes, will be a double-edged sword for Potash Corporation. On the one hand, the company will likely make a one-time windfall from its stake sale given the sharp recent rally in SQM’s shares.

On the other hand, Potash Corporation will lose its most lucrative investment; SQM is among the world’s largest players in the red-hot lithium market right now. 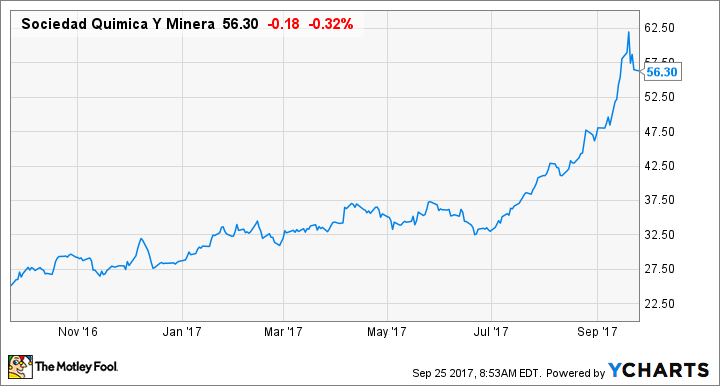 Potash Corporation doesn’t provide a break-up of its earnings from investments, but diving deeper into the company’s annual report reveals that these investments are contributing to its earnings in a big way.

Consider that in 2016, Potash Corporation reported net income of US$323 million; that included US$95 million that the company earned from its four “equity-accounted investees.”

Further elaborating on it, here’s what Potash Corporation Said, “Share of earnings of equity-accounted investees pertains primarily to SQM and APC. Lower earnings were mainly due to lower earnings at APC, partially offset by higher earnings at SQM.”

The inference is clear: Potash Corporation is putting SQM on the chopping block at a time when it is adding substantial value to its bottom line.

SQM, for its part, generated strong revenue and net income worth US$1.9 billion and US$278 million, respectively, last year, largely driven by lithium prices. Management has robust lithium expansion plans in the pipeline to position SQM as a key beneficiary as demand for lithium from electric cars takes off.

Potash Corporation may in fact also have to sell its other investments in view of its merger with Agrium. The companies have already extended the potential closure date for the deal to the fourth quarter of this year from the erstwhile third quarter.

While the two companies maintain that they expect “annual operational synergies” worth US$500 million after their merger, it remains to be seen how accretive the deal will be to the combined company Nutrien.

You can’t ignore the long-term implications

With the merger unlikely to have any impact on potash prices as other global potash producers continue to pump up supply, losing additional sources of income such as SQM doesn’t sound like the best idea for Potash Corporation right now.

There’s another concern: China is reportedly already eyeing a stake in SQM. If it strikes, the nation will also have bought some potash capacity, thereby reducing its reliance on imports to some extent.