Home » Investing » Why Has BCE Inc. (TSX:BCE) Struggled This Year?

BCE Inc. (TSX:BCE)(NYSE:BCE) is down more than 10% since the start of the year as the share price approaches its 52-week low. After hitting over $60 a share a year ago, it seems as though simply holding onto $50 might be enough of a challenge for the stock this year.

Why is BCE doing so poorly?

It’s not just BCE that is struggling; other telecom stocks are also having bad years: 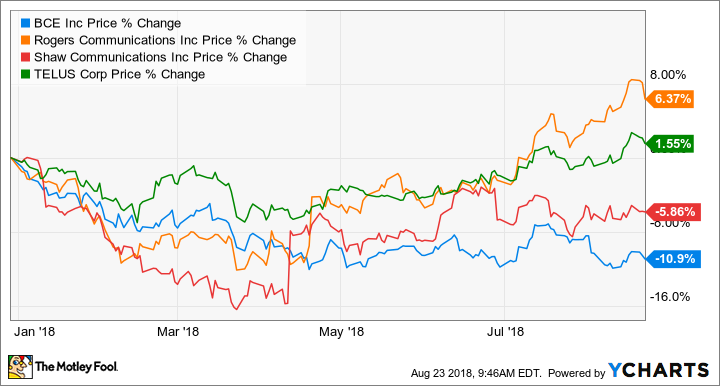 Rogers has been the best performing stock out of the big four, but the rest have had lackluster performances in 2018 thus far. And while it is clear that investors have been bearish on the industry this year as online services continue to be more competitive and appealing to customers, BCE has still lagged behind the others.

There hasn’t been a big sell-off that abruptly happened; instead, it’s been a long and persistent decline over the year that’s led the stock to where it is today. BCE has simply been unable to find any way back up in price.  While it has found some support at around $53, it’s hard to say how long that might hold.

BCE hasn’t fallen victim to any bad press that has weighed the stock down, but at the same time, there hasn’t been any terribly good news to justify better returns than its peers. In the company’s most recent quarter, sales were up a tiny 1.5% and profits were down by 7%.

The problem that all these telecom stocks face is that the industry is very mature and growth is going to be very limited, unless a company comes out with someone really new and exciting that draws in customers. Raising prices is the easiest way for companies to grow their top lines, as subscribers are often traded back and forth.

Is this just part of a trend?

If we look back to 2017’s performances, we see that this might just be part of a pattern that has been developing over time: 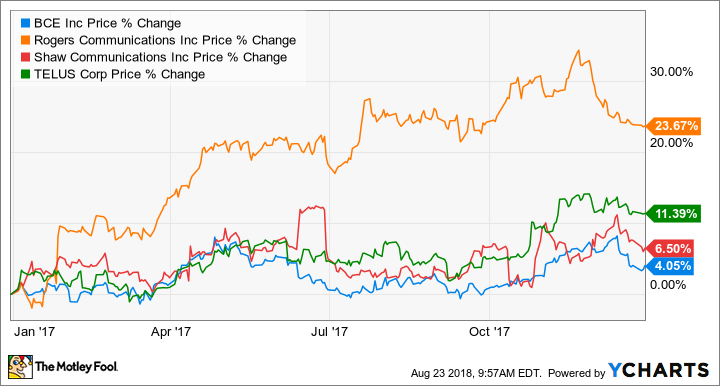 Investors have not been excited about BCE’s prospects, and I’m no fan of the company either. Unless it were to come out with a new and revolutionary product or service, it’s unlikely I’d ever consider investing in the stock. However, I can respect the stability that the stock has provided, and for some people that might make it a good investment, especially once you factor in its strong yield.

BCE hasn’t performed badly enough to warrant a big sell-off like it’s seen this year, but it’s also done little to keep investors from pulling their money out of the stock and into more attractive and higher-growth options, like say cannabis stocks.

Stocks don’t just compete with others in their industry, but the markets as a whole. If investors find better options to invest in, they will. And given the weak sales growth we’ve seen from BCE and the limited opportunities for growth that exist, it’s not hard to see why the stock has been dropping, as there’s been little to reason to get excited about it.