Home » Investing » Which of the Big Cannabis Companies Has a Better Competitive Advantage?

So far, nine states in the U.S. and the District of Columbia have legalized cannabis for consumer use and 31 states allow the medical use of marijuana. In addition, the date of the legalization of recreational marijuana in Canada is fast approaching on October 17.

It’s not just North America, either. With a growing population with legal access to marijuana around the world, the cannabis industry looks like it’s here to stay.

If you’re thinking of investing in the group, keep in mind that the stocks have been no less of a roller coaster ride. Buying on big dips and selling on pops can be very profitable, but deciding on how big of a dip to buy may be more art than science.

Investors seeking thrill and the chance to earn big bucks may be interested in the stocks, but it won’t be easy picking up the stocks and selling them at the right times.

Here are the year-to-date price actions of two big cannabis stocks to illustrate what I mean: 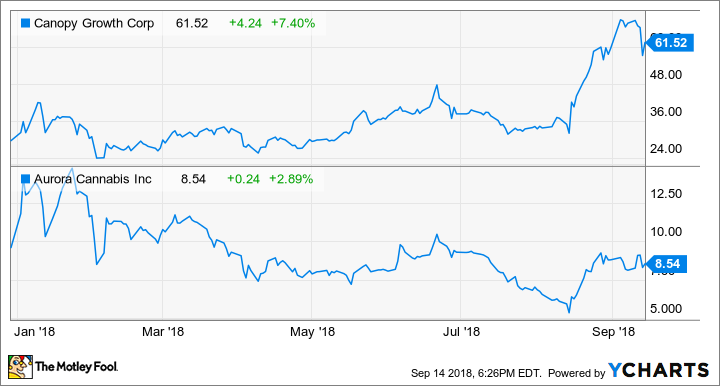 Canopy Growth has been building a basket of brands to sell its list of products under. Its brands include the Tweed and Vert brands, as well as the brands of DOJA, Tokyo Smoke, Maitri, and Van der Pop, from its latest acquisition of Hiku early this month.

Canopy Growth also formed a strong partnership with a leading beverage alcohol company and a top-performing Fortune 500 company, Constellation Brands, which now owns a significant stake (about 38%) in Canopy Growth.

Constellation Brands must believe that cannabis legalization will gain traction around the world and that Canopy Growth’s operations, which are already in 11 countries across five continents, will be a meaningful part of its future growth.

Aurora spun off its subsidiary, Australis Capital, which began trading publicly on September 19 on the Canadian Securities Exchange. Aurora shareholders as of the record date August 24, 2018, got one unit of Australis for every 34 shares of Aurora.

Aurora believes that Australis will be able to take advantage of the fragmented cannabis market in the U.S. and seek out and invest in high-quality operations and technology innovators, which have limited access to capital but have strong growth prospects.

Aurora sells and operates in 18 countries across five continents. Each of its facilities is built to meet the European Union GMP standards, and it boasts high-quality production at ultra-low costs.

Aurora is increasing its production fast. By the end of 2019, it will have 11 production facilities across 4.5 million square feet with a funded capacity of more than 570,000 kilograms per year.

Aurora has been expanding its domestic and international distribution channels. In Canada, it has a roughly 20% stake in Alcanna (previously known as Liquor Stores N.A.), and will be selling recreational weed through its stores. Further, Aurora has already successfully exported cannabis products to Germany, Italy, and South Africa.

The global cannabis market is big enough for multiple marijuana companies to operate in. Both Canopy Growth and Aurora have been widening their network, forging strong partnerships, and have their sights set on the global stage. Now you just have to decide how much you’d pay for the stocks.

A much safer investment would be to invest in a more diversified company that is much better valued, but will participate in the growth from the cannabis markets, such as Constellation Brands.