Home » Investing » What Are the Risks and Rewards of Investing in Cannabis Stocks?

Value investors as well as fund managers with a focus on value and fundamentals have avoided marijuana stocks and, as a result, have missed out on the rallies. 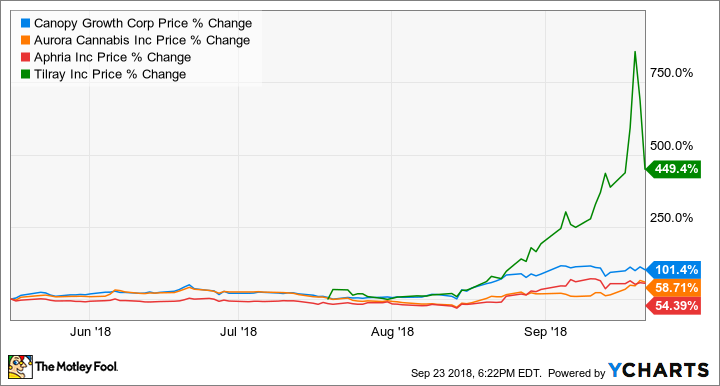 There’s no helping it, though. Most cannabis stocks aren’t yet profitable.

Their valuations remain super high, even when looking at the forward price-to-earnings and price-to-sales ratios. 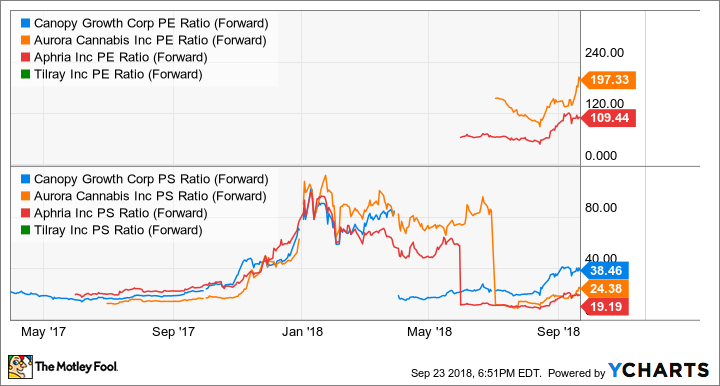 As we saw in the first chart, cannabis stocks tend to be much more volatile than the market. The beta is one form of measure of risk. Specifically, it measures a stock’s volatility against the market. Putting it simply, a beta of one indicates that a stock more or less moves like the market. A beta of greater than two indicates a stock is twice as volatile as the market. Yahoo Finance has a beta of 2.53 for Canopy Growth, -0.93 for Aurora, and 3.73 for Aphria. Yahoo Finance doesn’t show a beta for Tilray as of writing, likely because there’s not enough trading data yet available for Tilray. The potential reward in cannabis stocks can be humongous, because there’s more or less euphoria around the industry, as there tends to be more buys than sells to push the stocks to higher levels. But that’s when investors need to be careful.

The bliss in Tilray stock was obvious when the stock was pushed up as much as +750% from its initial public offering price. And then it was quickly dumped, moving down more than 40% in a matter of a few days from Wednesday to Friday. This indicates that there’s participation from speculative investors.

Cannabis is a new industry with lots of uncertainties and unknowns. There’s no history or track record for investors to draw inferences from. The astronomical multiples that marijuana stocks trade at also make it difficult for investors to value the companies.

While the trend of cannabis stocks remains positive, investors can continue to ride the wave. However, keep in mind that just because the trend is positive doesn’t mean the investment risk has diminished. On the contrary, ever higher prices (and multiples) may indicate that at one point, the stocks will become too expensive, even for speculative investing.

Value investors have missed the rally. However, cannabis stocks are speculative investments at worst and aggressive investments at best. We don’t know when the market might value the stocks at more rational multiples.